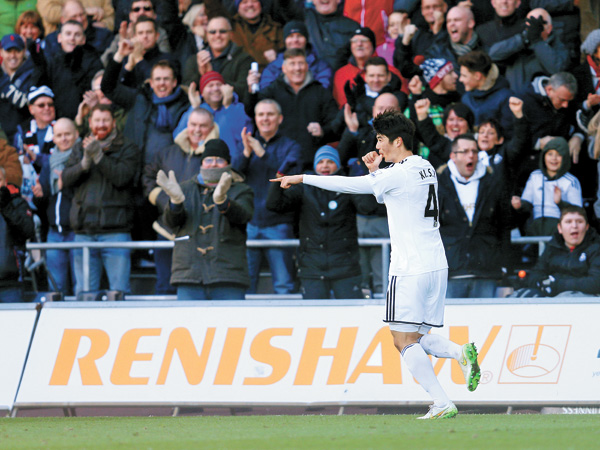 Swansea City’s Ki Sung-Yueng celebrates after scoring his side’s first goal of their match against Manchester United at Liberty Stadium in Swansea, Wales, on Saturday. [AP/NEWSIS]

Ki Sung-yueng of Swansea City AFC scored his fifth goal of the season in the team’s 2-1 victory over Manchester United in their match on Saturday and also revealed that he would become a father with a thumb-sucking goal ceremony.

After United midfielder Ander Herrera’s goal in the 28th minute, Ki scored an equalizer within minutes by gently redirecting his teammate Jonjo Shelvey’s cross from the left side of the penalty box.

Immediately after scoring, the 26-year-old briefly put his thumb in his mouth before joining his teammates to celebrate. Shelvey also reacted by sucking his thumb. After the ceremony, fans suspected that Ki’s wife Han Hye-jin is pregnant, which her agency Namoo Actors confirmed Sunday. The agency said she is now 10 weeks pregnant and is staying with her family in Korea.

Swansea City won the match 2-1 at home after a shot from Shelvey deflected off Bafetimbi Gomis and into the net in the 73rd. Ki contributed to the goal with a cross to Shelvey, but it was not counted as an assist because Gomis was recorded as the goal scorer. United failed to score again despite dominating the second half of the match.

British channel Sky Sports chose Ki as Man of the Match and gave him eight points for his performance, the highest of all players on the teams.

“[The goal ceremony] meant nothing,” Ki said shyly after the match in the mixed zone. “I’m very happy to score against United again, and I’m even happier that I’ve contributed to the team’s victory.”

It was also a chance for the team to bounce back from its loss to 14th-ranked West Bromwich Albion FC on Wednesday.

“Since we lost the last round, we desperately wanted to win today. Now we are confident as we won against a strong team and we got three points in a difficult time of the season,” Ki added.

Swansea City is now ninth in the league, 15 points ahead of Burnley FC and Aston Villa FC in the relegation zone, and they are hoping to make it into the top six to qualify for the UEFA Europa League. Swansea is six points behind sixth-placed Tottenham Hotspur FC, which has 43 points. Swansea has never finished in the top six in the EPL but qualified for the Europa League in the 2013-14 season after winning the Capital One Cup.

Manchester United dropped down to the fourth place.

Ki recorded his fifth goal of the season two weeks after scoring against Sunderland AFC on Feb. 8, and he has tied the record for most goals scored by a Korea in an EPL season, with the former national team captain Park Ji-sung. Park had five goals each in the 2006-7 season and 2010-2011 season at the Manchester United. There are 12 games left in the season.

Another similarity between the current and former national team captains is that they tend to be threatening against strong teams. After Ki’s goal on Saturday, fans started calling him “United killer” because he also scored against United when the two teams faced off at the start of the season.