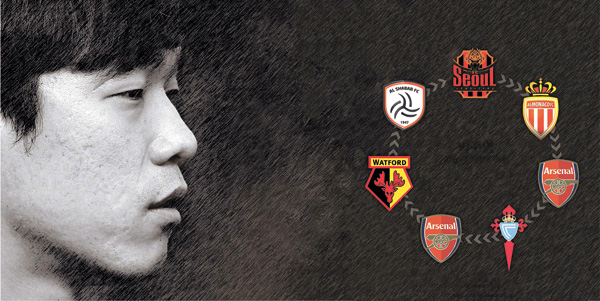 Park Chu-young said on Wednesday that instead of talking, he wants to prove himself on the pitch, and admitted it wasn’t an easy decision for him to return to his former club in K-League Classic.

FC Seoul held a welcoming ceremony for Park at Seoul World Cup Stadium a day after the club announced a three-year deal with the 29-year-old striker.

“Personally, it wasn’t an easy decision, but as the coach and club officials gave me clear answers and advice, I decided to come back to Seoul,” said Park. “In the end, it all depends on what you can show on the pitch instead of talking, so I will prepare thoroughly so I can perform well in the stadium.”

FC Seoul is where Park began his professional career in 2005. He was selected Rookie of the Year after netting 18 goals in 33 games. Park, who led Korea to a bronze medal in the 2012 London Olympics, said he had never thought about recovering his past reputation, only giving his best as a professional player. 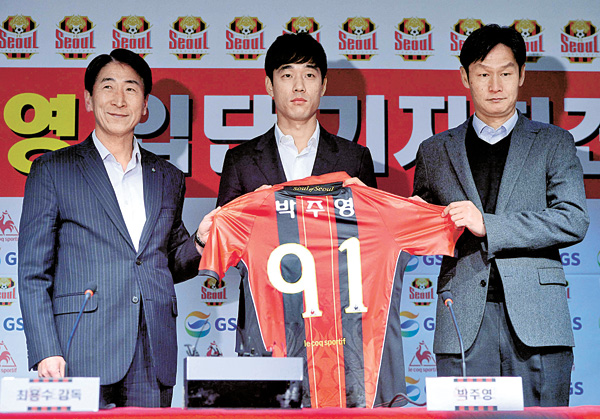 “The time I spent with Seoul supporters remains in my heart,” he said. “As I’m also entering the final phase of my career and don’t have much time left to play, I will try to produce exciting and memorable games for the fans.”

Park left FC Seoul in 2008 for French Ligue 1 club AS Monaco. After a solid three seasons there, he moved to Arsenal of the English Premier League.

However, he failed to earn regular spot and was loaned to Celta Vigo in Spain and Watford, an English club in second division.

The Daegu-born Park said he always wanted to play more games with Arsenal. Mentally, Park said, he tried to stay positive about the situation because negative thoughts change nothing.

“Arsene Wenger talks with players a lot, but he doesn’t talk about who is going to play in the game,” he said. “His perspective in training was that I wasn’t good enough, and I think that’s why I didn’t play.”

According to FC Seoul, Park is likely to join the team next month after he completes contractual obligations with his current club, Al-Shabab of Saudi Arabia. The striker signed an eight-month deal with Al-Shabab in October after his contract ended with Arsenal, but was released from last month.

However, it turned out Park is still under contract as an Al-Shabab player, and FC Seoul said it is waiting for an International Transfer Certificate (ITC) to be issued. Although Park’s K-League Classic debut is likely to happen soon, he will not be able to play in the AFC Champions League until the round of 16 because the player registration period has ended.

In the meantime, Park said he will train hard to get into game shape.

“I played full-time in all games until mid-December [with Al-Shabab], but after the coach was changed, I didn’t play,” he said. “However, I have been training regularly and I will improve my condition under coach Choi Yong-soo.”

Park, who played in the past three FIFA World Cups, said playing well at home will not be easy because the K-League Classic is competitive, just like any other league overseas.

Although, many believe Park’s return will boost the popularity of the K-League Classic, the striker humbly said he isn’t that popular.

“In order for more fans to come to the K-League, the game should be fun,” he said. “If we play attacking football, we will see more fans and supporters.”

Park, who has 24 goals in 68 games for the Korea, wasn’t included on the national team for the Asian Cup in January and watched as the Taegeuk Warriors finished second.

The former national team captain said it is too early to talk about him being selected to the team again.

“It’s not my decision,” he said. “All I can do is focus on training with Seoul and perform well on the pitch.”

FC Seoul said Park will wear number 91 this season, not the familiar number 10 jersey he wore during his first stint with the team and in the 2014 FIFA World Cup in Brazil. Park said he just picked that number because 10 was not available (currently taken by teammate Everton), but Choi said there is a connection with number 91, which can mean “9+1.”

“Park was once a striker who represented all Koreans, but that’s in the past,” said Choi. “I hope he will quickly become an important part of the team and understand what fans really want from him.”

Park said he doesn’t know what he will do after his three-year contract ends with the five-time K-League champions. But at least for now, he is goal is clear.

“After three years, I might end my career and I might continue, but that all depends on the situation and various conditions,” he said. “What’s important right now is that all of those things I said are impossible, if I don’t make the effort here.”