Ryu holds off Park for first victory of the season

Ryu holds off Park for first victory of the season 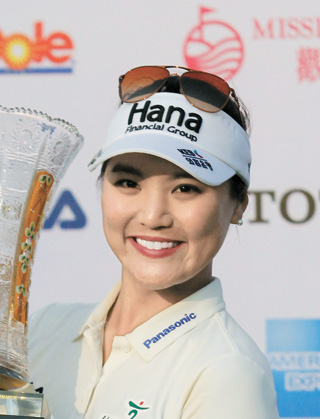 Ryu So-yeon claimed her first title of the season Sunday after beating compatriot and world No. 2 Park In-bee.

Ryu, who is ranked No. 8 in the world, started the final round at 9-under 283, a stroke behind Park at the World Ladies Championship on Mission Hills’ Blackstone Course in Hainan, China. However, she shot 4-under 69 and eventually lifted the trophy after finishing at 13-under 279.

That was one stroke ahead of Park, the defending champion who was looking for another wire-to-wire victory after winning the HSBC Women’s Champions in Singapore last week.

Meanwhile, with the top two places going to Koreans, the team event winner again was Korea.

In this event, organizers combine the scores of two golfers from the same country and give an award. Korea was 559, beating Suzann Pettersen and Marianne Skarpnord of Norway by 25 strokes.

As the event was part of the Ladies European Tour, it will not count as an LPGA victory, but Ryu was still happy, saying it will boost her confidence for upcoming LPGA tournaments.

“My goal was to collect my first trophy within the first 10 events, but since I did it at my fifth one, I’m happy,” said Ryu. “Besides winning, I’m happy I have found my putting sense.”

Talking about playing against Park, she said she didn’t feel any additional pressure. The 24-year-old golfer said that although she has experience playing with Park in the champions group, this was the first time they went head-to-head for a championship.

“As usual, we comfortably had conversation and enjoyed the game, and I want to thank her for that,” she said. “It gives me a new excitement, because I can challenge the player whose ranking is above me. I’m satisfied that I focused on my game instead of the competition in an intense situation.”

Ryu, the 2011 U.S. Women’s Open champion, at one point trailed Park by three strokes when she double-bogeyed the par-4 seventh. However, she came back with three birdies in four holes starting at the ninth. The former Asian Games gold medalist said she thought she would win when she birdied the 17th.

“I missed an easy birdie putt and had a bogey on the first hole,” she said. “Because of this, I was able to focus on my play.”

Ryu, who collected 70,881 euros ($74,676) for her first victory, said that while training during the winter, she had a difficult time with her driver as she didn’t get the distance she wanted. While working with Honma Golf officials, she was able to find accuracy and distance by the beginning of the season.

“As my driving game stabilized, I was able to get more chances on par-5 holes,” she said. “Since the second round, I also adjusted my stance a little bit for putting.”

Ryu, a three-time LPGA Tour winner, arrived in Korea at 7 a.m. Monday, then will leave for Los Angeles on tomorrow to prepare for the LPGA Kia Classic that starts March 26 at Aviara Golf Club in Carlsbad, Calif.

“I never had a season with multiple LPGA wins,” she said. “I want to keep up this momentum for the LPGA and get multiple wins, while winning the LPGA’s first major, the ANA Inspiration.”