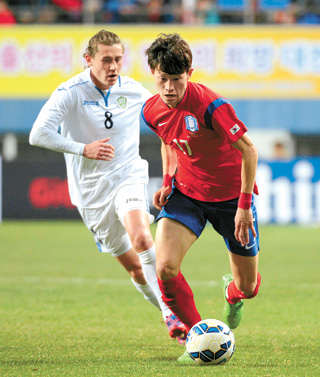 Korea’s Lee Jae-sung, right, dribbles the ball against Uzbekistan’s Server Djeparov in a friendly match at Daejeon World Stadium in Daejeon on Friday. Lee made his national team debut on Friday. [NEWSIS]

While Friday’s 1-1 draw against Uzbekistan wasn’t the result football fans were looking for, it at least left them with high hopes for the future after an impressive debut from some new faces in the Taegeuk Warriors ahead of the friendly against New Zealand at Seoul World Cup Stadium on Tuesday.

“Although it wasn’t a result that we were expecting, I don’t think the national team had a step back,” Stielike said after the friendly match.

“New players and players who returned to the national team after long time have all played well and our depth in the squad has increased.”

While Stielike said both did a good job, Jeong was replaced with Kim Chang-soo in the 41th minute due to a thigh injury.

The 25-year-old Ulsan Hyundai defender will not play against New Zealand on Tuesday night.

Lee, who started as a right midfielder, was all over the pitch until he was replaced by Jeonbuk teammate Han Kyo-won in the 86th minute. The hard-working midfielder, who made his professional debut last year, didn’t get a goal or make any assists, but his performance was enough to earn applause from Stielike.

“I haven’t seen much of Lee playing, but today he was showing his best,” the German coach said. “With abundant movement on the pitch, he showed good plays and made good decisions in the offense positions.”

For Lee, who won an Asian Cup gold medal with the under-23 national team, his goal for this year has already been achieved: playing for the Korea national football team.

He is usually placed on the central midfield for his club, but he was on the right side in the Korean team on Friday, wearing the No. 17 jersey usually taken by national side regular Lee Chung-yong.

The 26-year-old, who plays for Crystal Palace in the English Premier League, wasn’t included in the squad for this friendly.

“Coach told me to play with confidence since there was nothing to lose,” he said. “I focused on penetrating the inside, and I’m satisfied with that part.”

As for his partnership with Son Heung-min, Lee said the Bayer Leverkusen star forward did well at supporting him because they are friends. However, Lee said that this is just beginning.

“Although I did pretty well in the first half, I made some pass misses in the second half, which I have to improve it,” he said.

“I need to be more acute and execute my plays well using teammates.”

While Lee made a successful debut, some players who returned to the national team after long absences also showed a good performance against Uzbekistan, further raising hopes for the future.

Kim Bo-kyung, who plays for Wigan Athletic in the English second division, also featured for the first time in the national team since Stielike took the helm in October. The 25-year-old was a starting member in the central midfield along with Han Kook-young.

The former Cardiff City player has been playing in more offensive roles, but this time he went deeper into the midfield, taking on the role usually reserved for Swansea City’s Ki Sung-yueng.