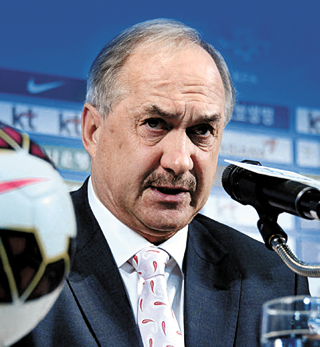 Korean national football team coach Uli Stielike announces his 23-man squad for a friendly against UAE and the World Cup qualifier against Myanmar in Seoul on Monday. [NEWSIS]

Left foot specialist Yeom Ki-hun has returned to the Korea national football team for the first time in 17 months as coach Uli Stielike on Monday announced the 23-man squad for the upcoming 2018 FIFA World Cup Asian qualifier against Myanmar.

The Taegeuk Warriors will face Myanmar on June 16 in Bangkok, after Myanmar was banned from playing at home due to crowd violence in 2011. Before the World Cup regional qualifier, Korea travels to Kuala Lumpur, Malaysia, to face the United Arab Emirates on June 11.

For the upcoming matches, Stielike said there will be some new faces, because nine players regularly included on the national team roster are not available.

Koo Ja-cheol and Park Joo-ho, both playing for FSV Mainz 05 in the German Bundesliga; FC Augsburg’s Ji Dong-won; and Kim Bo-kyung of Wigan Athletic will miss the matches because they are in four weeks of military basic training.

Although Korea won’t travel with some core players, Stielike said he won’t “find excuses.” The 60-year-old German coach added that his squad for the upcoming matches contains strong performers in the K-League and other young players who are the future of the team.

“First, I have rewarded players who have been performing well in the league,” Stielike said Monday at Korea Football Association headquarters in Seoul. “Second, the squad has been assembled to prepare the next generation of players ahead of the World Cup.”

Jeonbuk Hyundai Motors, currently the leader in the K-League Classic and the only local club to reach the quarterfinals of the AFC Champions League, placed four players on the team. In addition, only three players are in their 30s.

Among the newcomers, Stielike said he had second thoughts about including the 32-year-old Yeom because of his age, but the Suwon Samsung Bluewings midfielder is highly qualified under the coach’s first criterion.

“I’ve said many times the domestic talent pool on offense isn’t very deep, and it doesn’t make sense if I don’t pick a player who is leading in goals or assists in the K-League,” said Stielike. “I believe players who work hard and produce good results should be compensated accordingly.”

Yeom, who played in the 2010 FIFA World Cup, has six goals and six assists in 11 K-League Classic matches. The former Jeonbuk and Ulsan Hyundai player leads the league in assists and is second in goals.

Yeom, who has three goals in 49 matches for Korea, is one of three players on Stielike’s squad for the first time. The other two are Jeonbuk midfielder Choe Bo-gyeong and Seongnam defender Lim Chai-min.

Defensive midfielder Choe, 27, will make his international match debut, along with defender Lee Ju-yong, midfielders Jung Woo-young and Kang Soo-il, and forward Lee Yong-jae. These four players trained with Stielike’s team in December. Kang, 27, is the second multiracial footballer to play for Korea. The Jeju United forward, whose father is American, has five goals in 12 league matches.

“Kang is a versatile player who can play in the flank, as well as a center forward,” said Stielike.

The KFA said the team, ranked 57th in the world, will leave for Malaysia on June 8 for the friendly against the UAE before facing 158th ranked Myanmar for the World Cup qualifier.