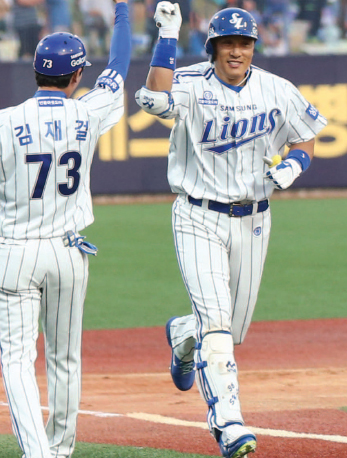 Lee Seung-yuop of the Samsung Lions celebrates with third baseman coach Kim Jae-gul after hitting his 400th home run in the Korea Baseball Organization. The solo shot, his 10th home run of the year, came in the third inning against Lotte Giants pitcher Koo Seung-min before a home crowd at Pohang Baseball Stadium in North Gyeongsang. Including his eight seasons in the Nippon Professional Baseball, Lee, who made his professional debut in 1995, now has 559 home runs in his career. [Ilgan Sports]