Going out on a limb with wife, fan finds historic ball in a bush

Going out on a limb with wife, fan finds historic ball in a bush 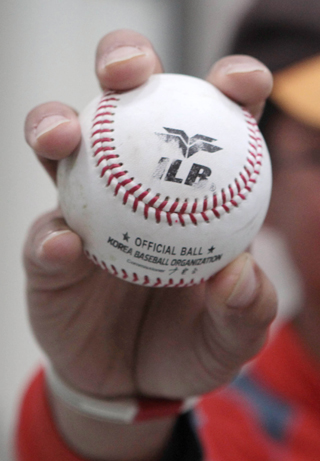 From Tuesday, Pohang Baseball Stadium was the top destination for baseball fans, even if they were not supporting the Samsung Lions or Lotte Giants, because Lions slugger Lee Seung-yuop was one away from his 400th home run in the Korea Baseball Organization (KBO).

Just like many would expect from the lefty hitter, Lee’s historic home run Wednesday went over the right field fence where throngs of fans were wearing gloves. But the ball bounced and left the stadium.

Suddenly, it was a treasure hunt.

Before the game Wednesday, Lions manager Ryu Joong-il even joked that Lee’s 400th home run ball should be worth 1 billion won.

While more than a hundred fans searched for the 400th home run ball in bushes around the stadium, the lucky man was wearing hiking clothes.

“Since my wife wouldn’t have allowed me to go to the baseball stadium, I got here by telling her I was going for a hike in the mountains,” Kim Jae-myung, who now owns the valuable home run ball, told reporters Wednesday.

Kim, 43, said he came all the way from Cheonan, South Chungcheong, which is about 300 kilometers (186 miles) northwest of Pohang, North Gyeongsang, for a chance to collect Lee’s home run ball.

Kim said that when Lee was about to break the Asian single-season home run record with his 56th in 2003, he planned to go Gwangju Baseball Stadium, but had a car accident en route.

While some may see him as a baseball bounty hunter, Kim said he is an avid fan who plays on a club in his community. However, he is a fan of the LG Twins, a traditional rival of the Lions.

The Lions already said that whoever gets the 400th home run ball and donates it will receive a Samsung Electronics Galaxy S6, a tourism ticket to spring training camp, a bat autographed by Lee and an opportunity to throw out the ceremonial first pitch at a future game.

“As a man who also plays baseball in the local community, I do plan to donate it,” said Kim, “but I will make a decision after I discuss it with my wife.”

Meanwhile, Kim’s baseball was officially confirmed as the one Lee hit for his 400th home run after umpires checked a special mark on the ball. In order to prevent fans from claiming compensation for a fake baseball, umpires made an identifying mark on the letter “O” of the KBO logo.