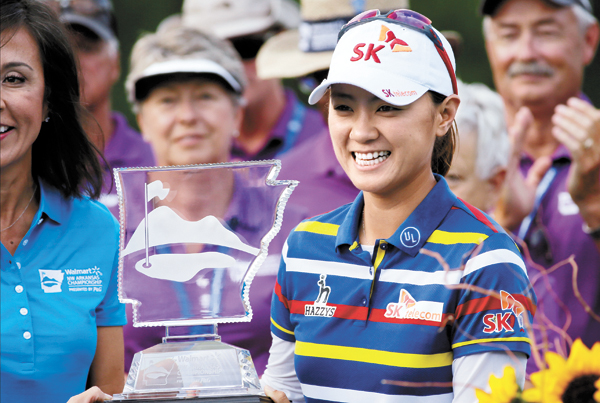 ROGERS, Arkansas - Even Choi Na-yeon wasn’t sure if Sunday was the time for her ninth career LPGA Tour title, as she struggled throughout much of her round at Pinnacle Country Club.

The Korean couldn’t make putts, was off with her irons and heard the roars in front of her as local favorite and defending champion Stacy Lewis surged past her into the lead.

A double dose of timely 8-iron magic, however, fueled a shocking and sudden late victory for Choi - whose dramatic eagle on the par-4 16th sparked her two-shot win in the NW Arkansas Championship.

“I thought it was going to be good, but I didn’t expect it to go in,’’ Choi said. “I was very happy after that shot, but unfortunately I couldn’t see the ball going in. I just heard a lot of screaming around the green.’’

Choi, the second-round leader, trailed Lewis by a shot after her tee shot on 16. What followed was an 8-iron from 142 yards that one-hopped into the hole to give her a one-shot lead.

She followed with another 8-iron to a foot of the pin on the par-13 17th, leading to a second straight birdie and an eventual 2-under 69 for the day - enough to finish 15 under overall for her first win since a season-opening victory at the Coates Golf Championship in Florida.

Choi won despite needing 33 putts in her final round, and she was 1 over for the day before her eagle on the 16th. She managed to relax following her second bogey of the day on No. 13, remaining confident while keeping an eye on the leaderboard and Lewis, who missed several birdie attempts in the group ahead of her.

That confidence eventually led to the nearly perfect back-to-back 8-irons that were enough to overcome any other struggles for the day.

Mika Miyazato finished second at 13 under after a 67.

While Choi celebrated, the ending was difficult for Lewis, who bogeyed her final hole for a 68 to tie for third with Azahara Munoz (66) and Anna Nordqvist (70) at 12 under. Second-ranked Lydia Ko had a 63 to tie for sixth at 11 under.

Lewis has gone 27 tournaments without a victory, her longest since a 25-tournament stretch between her first and second career wins in 2011-12.

“It’s tough, but honestly it’s been a few weeks since I’ve been in this position and a few months, really, so you can’t be too upset,’’ Lewis said. “When somebody holes out and makes birdie on 16 and 17, you know, it’s one of those things that it’s kind of meant to be for [Choi].’’

While Choi struggled for much of her round, shooting a 1-over 37 on the front nine, Lewis - who began the day four behind - surged to the lead with her fourth birdie of the round on No. 10 to reach 13 under.

However, the former University of Arkansas player had birdie attempts lip out on Nos. 11 and 12 and she was unable sink a number of birdie putts on the back nine, including a 6-foot attempt on No. 17.

Choi’s shocking eagle sent her to 14 under, a shot ahead of Lewis.

Choi then followed her remarkable 8-iron make by nearly acing the par-3 17th, with her ball hitting short and rolling to a foot from the hole. She made the birdie putt to reach 15 under and overcame an errant tee shot on the 18th with a 12-foot par putt.

“I didn’t give up,’’ Choi said. “I didn’t putt well, but I hit it well and thought I could win without putting.’’

With the victory, Choi became the 10th female golfer to surpass $10 million in prize money for her career. She is also projected to move up in world rankings from 20th to 13th.

Meanwhile, Amy Yang, who won the Honda LPGA Thailand in February, tied for ninth along with Cristie Kerr, Marina Alex and Mariajo Uribe at 10-under 203, while Kwak Min-seo followed her for 9-under 204 for a 13th place tie along with two other golfers.

Kim Sei-young, who already has two wins this season and is a top contender for LPGA Rookie of the Year, was tied for 16th along with first-round leader Hur Mi-jung and four others.