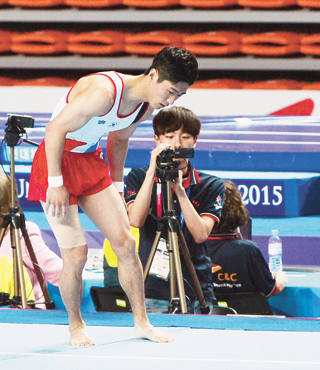 Yang Hak-seon leaves the floor during the team competition at the Gwangju Universide on Saturday. [NEWSIS]

Yang Hak-seon, the 2012 London Olympics vault champion, has decided to withdraw from the 2015 Summer Universiade in Gwangju due to a hamstring injury, the Korean Olympic Committee (KOC) said on Sunday.

“Yang was committed to competing in his remaining events even after becoming injured,” the KOC said in a release on behalf of the Korean delegate in the Universiade. “However, he accepted the advice of medical officials that his injury would get worse if he forced himself to compete, and to protect his ability to participate in the Summer Olympics in Rio de Janeiro next year, he will not be competing in the remaining events.”

Yang failed to complete a floor exercise routine for the men’s team competition on Saturday at Kwangju Women’s University Universiade Gymnasium after he felt pain in his right hamstring, which he had struggled with for the last three weeks. The graduate student at Korea National Sport University completed his performance for the ring event later the same day, and told reporters that he would “grit his teeth against the pain” until the end of the games.

However, after his routine on Saturday, the Korean delegation and medical officials persuaded him not to compete in the remaining events.

“He needs at least six weeks of rest and rehabilitation,” the KOC officials said. “The exact situation of his injury will be known after completing an MRI scan and other inspections.”

Yang, nicknamed the “god of vault,” has been looking to recover his top status through the Universiade. The two-time World Artistic Gymnastics champion failed to defend his Asian Games gold medal after settling for silver in Incheon due to a thigh injury. He also failed to medal at the 2014 Worlds in Nanning, China.

Yang received attention during this Universiade because he is both the reigning Olympic champion and a Gwangju native. He was the final torch bearer to light the Universiade cauldron along with Park Chan-ho, the first Korean to play in Major League Baseball, at the opening ceremony on Friday.

The Korean delegation said Yang will stay at the Athletes Village until the end of the Universiade to receive treatment.