Eagles slugger back on track

Eagles slugger back on track 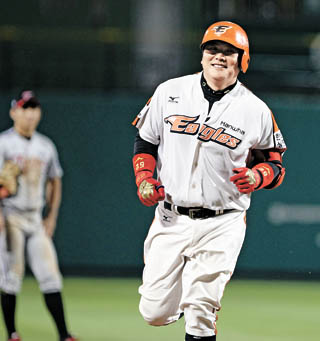 The Hanwha Eagles, who have been the league’s worst team for the last three years, have shown marked signs of life this season in the Korea Baseball Organization (KBO) under their new manager, Kim Sung-keun. Like the team itself, the Eagles’ cleanup hitter, Kim Tae-kyun, is also having a hot season.

After a stint with the Chiba Lotte Marines in Japan, he returned to Korea and was the KBO home run king in 2008 and batting champion in 2012. But he was benched in May because of a nagging hamstring injury, and in some fans’ eyes wasn’t earning his 1.5 billion-won ($1.3-million) salary.

But in June, Kim silenced his critics. In the course of 22 games last month, he posted a .405 batting average, hit nine home runs and drove in 34 runs. That torrid pace earned him the league’s MVP for the month of June. He will also play in the All-Star Game on Saturday.

Ilgan Sports, an affiliate of the Korea JoongAng Daily, met with Kim last week to talk about how he broke out of his slump earlier this season.

Q. Your manager, Kim Sung-keun, praised your performance in June, saying, “That is what a cleanup should do.”

A. I felt good when the manager said that. In May, I felt sorry for the team because I couldn’t do much because of the hamstring injury. When I was resting from the injury, all I could do was take batting practice and focus on rehabilitation.

Your batting eye in June was remarkable. What’s the reason?

As I kept practicing, it just kept getting closer to the hitting point. I recovered some energy when I was taking a rest in May, and my concentration improved. I just thought I needed to be a player who could help the team on offense.

You also hit nine home runs in June, the most of any player in the league.

Actually, I don’t care much about home runs. I feel happier that I had more than 30 RBIs. I think I delivered runs when the team needed them the most. Getting RBIs isn’t something I can do by myself. I don’t want my teammates’ efforts to be in vain. I don’t want to ruin scoring chances that players in front of me had made. I focused hard on getting RBIs.

You swung a lighter bat as last year’s season went on, but this year, you picked up a light bat from the opening game. Why?

Last year, I started with a bat weighing 1 kilogram (2.2 pounds), but later in the season I used lighter ones. As I said in the past, I realized the problem after my wife asked me, “Why are you swinging a heavy bat when you are beginning to lose energy?” So this year, from the start of the season, I’ve used lighter bats. I now use one weighing 880 grams and my swing has gotten faster. Before the season started, I did a lot of training, more than at any other time before, and it was a physical challenge. I thought I couldn’t develop a good swing with a heavier bat.

You were criticized for batting cleanup but not coming through in the clutch. That’s different this year.

If I lack power and am not destructive as a cleanup hitter, it’s fair to be criticized. Of course, from my perspective, that’s not good to hear. But what I can say is that I always did my best in a given situation. I never thought I performed badly. Since I put out all my effort, I don’t feel bad. But I’m in a position where I can attract criticism. If I pay attention to it, I will regress more. So when I face a difficult situation, I just blame myself. That way, I feel more comfortable.

You had been carrying the load of the team’s offense on your own, but again, this year it’s different.

That’s correct. This year, when I can’t deliver something, my teammates do it. Now I feel less of a burden and that makes me swing more aggressively. My swing is different depending on the situation, but I generally feel that I got more aggressive.

The season has passed the halfway point, and the Eagles are in fifth place with a winning percentage of over .500.

As we win more, the players also got more confidence. Even if we are losing by three or four runs, we now think that we can turn the game around and win. When we are down a run or two, we are confident our pitchers will keep us close. I think our strength in the later innings of games is better and that is leading to a good performance this season.

Before the season started, the Eagles were projected to be in the middle or lower level of the league table.

When I first heard that prediction, I wanted to ask people, “Are we that weak?” Some players are out because of injuries, but if we return to full power, I don’t think we will be behind any other team. There was speculation that our pitching was weak, but I don’t agree. They have power and are so far doing well. And even if our pitchers give up runs, we score runs. That’s baseball.

What do you think of your manager’s baseball style?

His way of playing the game is unique. I am surprised sometimes during the games. Most of our players have been in the game for more than 10 years and think, “There will be this kind of play in this kind of situation,” but our manager does the unexpected. For example, if there is a squeeze play, he always orders it at a time the opponents never dream of.

You can declare yourself a free agent after this season. What might you do?

Honestly, I don’t think about that right now. Even without the free agent issue, I don’t even have time to get a haircut. I just don’t have enough free time to think about things other than the games. But what’s certain is that the Hanwha Eagles are the team that made what I am right now.

The support from Eagles fans this year is immense.

Fan fever is the best this season, even better than when Park Chan-ho joined our team in 2012. Not only me but all our players are thankful for the fans’ support, even if we aren’t doing well. So it’s about time to get to the postseason for the sake of the fans. Now, we don’t say, “We will do our best,” but “We must do well.” Even if we lose, we have to lose while showing our tenacity. We have to give back to our fans.

If you can do well in the second half, the postseason doesn’t seem so far away.

I think it is an opportunity, and we need to win the championship at a time like this. Before this interview, I checked the league table and was surprised that the gaps between teams are not that big. This year’s race is tight. I think we can go one step further if we come through in critical moments in games, but we haven’t always done that yet. It sometimes looks like we are, but then we fall apart (laughs). If we can focus more, I think we can move up. In addition, our manager is strong in postseason play.

You’re eager to get championship because you haven’t had one since turning pro.