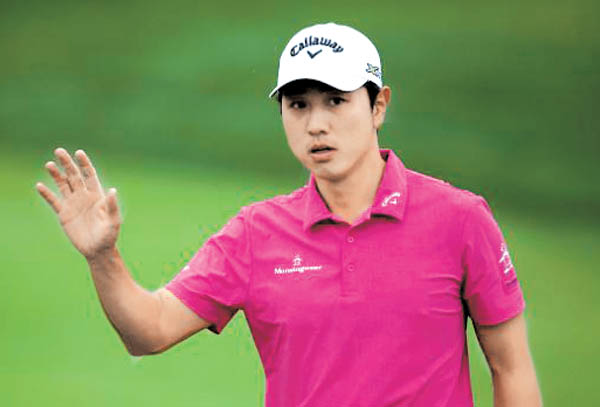 Bae Sang-moon, who has been battling his mandatory military duty in court, said Wednesday he will soon return to Korea and complete his service.

His decision came just hours after losing his legal battle against the local branch of the Military Manpower Administration (MMA) in Daegu on Wednesday.

Bae, a two-time PGA Tour winner, is currently staying in Oakville, Ontario, where he is preparing to play in the RBC Canadian Open.

Bae, 29, filed a lawsuit against the MMA, asking the court to nullify the agency’s decision to reject the extension of his overseas travel permit. The Daegu District Court dismissed Bae’s request, saying the MMA’s decision was appropriate.

“I respect the court’s ruling fully and will accept the decision of law humbly,” Bae said in a statement. “I think that I can further grow as a golfer by returning home soon and completing my mandatory military service. But as for the returning date, I will deeply consider and announce as fast I can.”

Bae, who earned his U.S. green card in 2013, has been extending his permit to play in the PGA Tour and delay his military duty.

The MMA refused to accept Bae’s request for an extension in December, saying the golfer spent too much time in Korea over the past year to be considered an overseas resident. It later asked Bae to return to Korea no later than Jan. 31.

Bae refused and filed an administrative suit on Jan. 16. He claimed he needs an opportunity to play in the next Summer Olympics in Rio de Janeiro, where golf will be an official sport for the first time.

In February, the MMA in Daegu reported Bae to the Daegu Nambu Police Station for violating the country’s Military Service Act after he didn’t return to Korea by Jan. 31.

The court said Wednesday that if it allows Bae’s request, it would be unfair to the public. It added that Bae’s ability to participate in the Olympics is uncertain at this time.

Bae is still under investigation for his violation of the Military Service Act and as soon as he returns to Korea, the golfer will be subject to examination by the police.

Sports observers said the ongoing court battle over his violation will delay Bae’s entrance into the military for the foreseeable future.

“The exact time of when and how he should complete his military service will be determined after the court rules on his charges for violating the Military Service Act,” the MMA spokesman told the JoongAng Ilbo, an affiliate of the Korea JoongAng Daily. “In Bae’s case, he could be given the maximum sentence of three years in jail.”