All eyes on KLPGA’s second major

All eyes on KLPGA’s second major 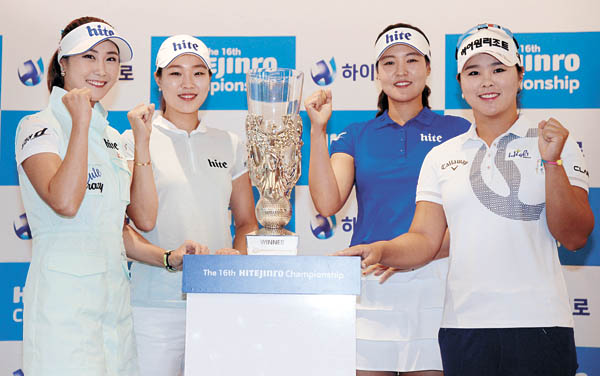 The 2015 U.S. Women’s Open champion Chun In-gee is aiming to collect another trophy over the weekend, this time at home.

The KLPGA Tour’s second major tournament, the Hite Jinro Championship, starts today at the Blue Heron Golf Club in Yeoju, Gyeonggi, with 132 golfers. Entering its 16th edition, the tournament offers 160 million won ($138,780) for the winner from the 800 million won purse, while giving 70 points for the KLPGA Tour MVP selection, nearly double that of normal KLPGA Tour events. In addition, the champion will also grab a full-time tour card for four years.

While competition is heating up, all eyes are on Chun and defending champion Kim Hyo-joo.

Chun, who decided to join the LPGA Tour from next year, is currently the prize money leader in the KLPGA Tour with more than 559 million won this season.

The 20-year-old has collected three wins this year on the KLPGA Tour but none were major. If she wins the Hite Jinro Championship on Sunday, Chun will be the first Korean to win major trophies from Korea, Japan and the United States in a single season.

Before winning the U.S. Women’s Open on July 12 in her first attempt, Chun this May became the youngest champion of the World Ladies Championship Salonpas Cup on the JLPGA Tour.

“Since the event is hosted by my main sponsor and there is a big record up for grabs, I really want to win,” Chun said at a press conference held at the Westin Chosun Hotel in Seoul on Tuesday.

“The course is difficult and sometimes there are gusts of wind, which I think gives an advantage to golfers with lots of experience.”

The question is whether Chun is healthy enough to win. After returning from the United States, she played in the BMW Ladies Championship but withdrew from the final round on Sunday citing fatigue.

“I had a tight schedule after returning home and had no time to adjust from the jet lag,” she said. “Taking advice from senior players, I will become a golfer who can manage her schedule and maintain her conditioning well.”

Chun’s top rival will be defending champion Kim Hyo-joo, who is returning from the United States after tying for fifth at the Marathon Classic over the weekend. The 21-year-old has been fully focused on the LPGA Tour this season as a rookie, already collecting one trophy after winning the JTBC Founders Cup in March.

However, she has also been busy defending her title on the KLPGA Tour. Kim was last year’s KLPGA Tour MVP after winning five events and leading in prize money. The world’s fourth-ranked golfer has been successful this season thus far, winning two of the four KLPGA Tour events she participated in.

“The most important thing at this moment is to adjust my condition and get rid of my fatigue after a long trip,” she said. “My goal for this event is to enjoy every moment, but at the same time, I won’t miss chances to win when they present themselves.”

Cho Yoon-ji is looking for a back-to-back win after she took the inaugural BMW Ladies Championship on Sunday. The 24-year-old, who holds the KLPGA Tour record for the most consecutive birdies at eight, ended her five-year win drought with the victory and is hoping to continue the good rhythm.

“I now have this sense of confidence,” she said. “I think the course will give an advantage to long range hitters. I will get birdies on aggressive holes and will try to defend on difficult holes.”

Lee Jung-min and Ko Jin-young are also eyeing the trophy. Both have three wins this season - tying with Chun for most wins - and are looking for their first major championship.

Lee is currently second in prize money ranking, trailing only 51 million won behind Chun, while Ko is third with 458 million won. Both players can become the top prize money earners with the victory.

Other contenders include Park Sung-hyun who won the season’s first major, the Korea Women’s Open, along with Kim Min-sun and Kim Bo-kyung, who both have one wins this season. The 2009 champion Seo Hee-kyung, who returned to the green this March after giving birth to a son, is also competing.

Meanwhile, main sponsor Hite Jinro said that 40 million won, or 5 percent of the total purse, will be donated to a local welfare center for children and old people.