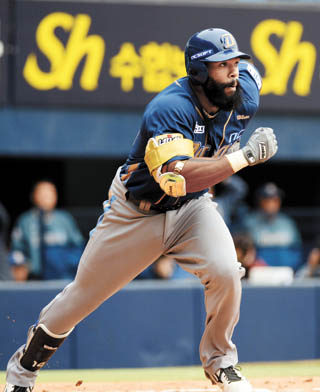 Although there are still about 40 games left, the title of top batter in the Korea Baseball Organization (KBO) League will almost certainly be a toss-up between two sluggers: the Nexen Heroes’ Park Byung-ho and the NC Dinos’ Eric Thames.

Park and Thames, both born in 1986, are neck-and-neck in almost all batting categories and individual awards, such as MVP and the Golden Glove. Both are the first baseman for their clubs.

If Park takes the home run and RBI title this year, he will be the first player in KBO history to win both for four consecutive seasons.

Park is currently standing shoulder-to-shoulder with former greats like SK Wyverns manager Lee Man-soo and Lotte Giants batting coach Chang Jong-hoon. Lee topped home runs and RBIs in the league from 1983 to 1985, while Chang led the two categories from 1990 to 1992.

“As the weather gets hot, I think pitchers are less able to concentrate,” Park told the JoongAng Ilbo, an affiliate of the Korea JoongAng Daily, last week. “I’m not missing their misguided pitches, and that’s why I’m getting good hits.”

But Thames, who is in his second KBO season, is not willing to give Park both titles for free. The former Toronto Blue Jays and Seattle Mariners player has hit seven home runs and 15 RBIs so far this month. Last year, he was third in home runs (37) and second in RBIs (121).

Although Thames is behind Park in home runs, RBIs and hits, the American is leading in almost all other batting categories. His top-notch batting average and slugging percentage can give him a big edge against Park.

Thames is also the top in on-base percentage (.489) and runs scored (104). He’s on his way to breaking the record .503 on-base percentage set by former Lotte Giants power hitter Felix Jose in 2001 and the 135 runs scored by the Heroes’ Seo Geon-chang last year, which would make him the KBO all-time leader in both categories. 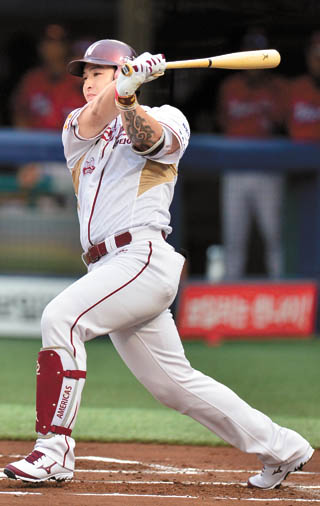 Thames became the first batter in KBO history to hit for the cycle twice in a single season, getting his second against Park’s team, the Heroes, last Tuesday. 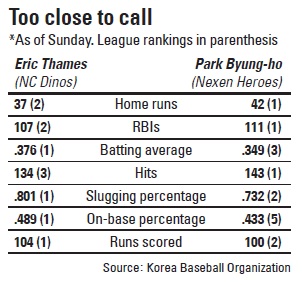 The California native is now looking for another unprecedented record in the KBO: getting 40 home runs and 40 stolen bases.

The “40-40” has appeared in neither Korea nor Japan. In Major League Baseball, only four players - Jose Canseco, Barry Bonds, Alex Rodriguez and Alfonso Soriano - have reached the milestone.

When asked about the record, Thames said, “Why not? I’ll go for it.”

For the MVP award, both personal records and team performance are critical. The Dinos are currently second in the league, while the Heroes are fourth. The Dinos, based in Changwon, South Gyeongsang, have beaten the Heroes 10 times, while losing only once.

Experts said there is no doubt that the two will go head-to-head for the first baseman Golden Glove award, if not the MVP award as well.

The last time a foreign hitter claimed the KBO season MVP was in 1998, when Tyrone Woods did so with the Doosan Bears.

Park was the KBO MVP in 2012 and 2013. He was the KBO Golden Glove winner in the first baseman position for the last three years.

“Since each team is playing 144 games for the first time, the key point will be who can keep up their performance until the end of this season,” said former LG Twins manager Lee Soon-chul, now a commentator for SBS Sports.