Athletes get a big kick out of contest

Athletes get a big kick out of contest 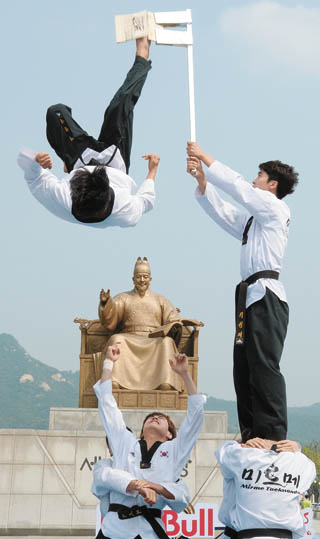 It could have been a scene straight out of a Jackie Chan movie, but it was a demonstration of kicking skills at Gwanghwamun Plaza in Seoul on Monday.

Shoppers stopped in their stride to watch athletes demonstrate their kicking abilities for the upcoming Red Bull Kick-It competition, where elegance counts more than aggression.

“It feels like I watched a Bruce Lee or Jackie Chan movie and got rid of stress,” said Yoo Chang-yon, who watched the showcase. “I have a first dan in taekwondo, but I want to learn tricking.”

Red Bull says Kick-It is a sporting competition that is “not designed to discover the toughest martial artist, but the most elegant.” It brings together disciplines as diverse as capoeira, karate, kung-fu, taekwondo, gymnastics and even breakdancing.

In Korea, Kick-It first started in 2013. The final is set for Sunday at Seoul Nori Madang in Jamsil, southern Seoul.

In the final, 16 kickers from across the globe will perform their best kicks and tricking techniques. The kickers have to compete in two rounds, first to demonstrate their tricking skills and later to display their ability to break boards with their feet.

For each round, judges will evaluate participants’ kicking skills, athleticism, body control, acrobatics and creativity. The winner in Seoul will move on to the Red Bull Throwdown, a martial arts event taking place in the United States in October.

Korea, the birthplace of taekwondo, has produced top performers in this kicking event. Yoo In-gun, 27, was last year’s champion after completing a “Cheat 900 kick,” where he made two and a half spins in the air before breaking three boards. He is a taekwondo practitioner who previously performed at Kukkiwon, the World Taekwondo Headquarters.

“I want to test the limit of the human body,” he said. “I fell into kicking and practiced 11 hours a day.”

The champion title allowed Yoo, who earned the nickname “Kick Gun,” to perform his skills at last year’s Red Bull Throwdown in Atlanta. He also appeared in the Korean action movie “Kingsman.”

Kick-It is not a men-only event. Among 76 participants in the second-round qualifiers, six were women. Among them was former taekwondo national team reserve Lee Soo-jin.

“Because of angina, I had to quit taekwondo and started tricking in 2008,” she said. “People will not know the feeling of flying high with a kick unless they do so.”

The goal of Kick-It performers is to make tricking more popular with the public. In Korea, there are currently six tricking teams, including “King of Connection,” where Yoo is a member, and “Mirme,” where last year’s third-place finisher Shin Min-cheol is performing. They not only compete, but also perform and give lessons to the public.

“Tricking goes through three stages: challenge, failure and success,” Shin said. “As you get closer to the target, you get happy. My goal is to make a tricking association and issue a license to those who complete the course.”