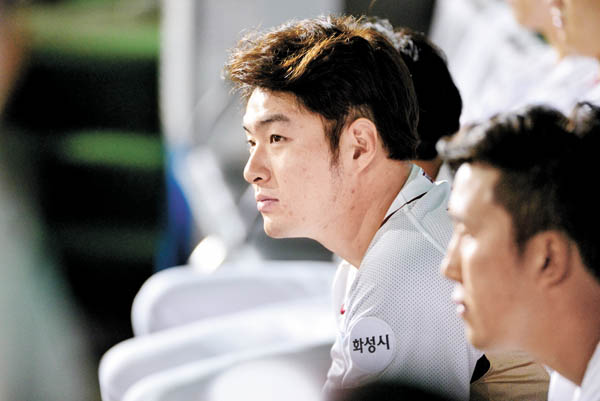 The Nexen Heroes’ Park Byung-ho watches his team’s game from the dugout at the Mokdong Baseball Stadium in Seoul on Sept. 2. [NEWSIS]

When the Nexen Heroes’ Park Byung-ho notched his 49th home run on Sunday against the NC Dinos, the 29-year-old slugger couldn’t celebrate - his team still lost 9-3.

“It’s meaningless to get a home run in a game that our team lost,” he said afterwards.

But Park didn’t have to wait long to party. On Monday, he became the first player in Korea Baseball Organization (KBO) history to get 50 home runs for two consecutive seasons, and he also led the team’s 4-1 victory.

In a game against the NC Dinos in Changwon, South Gyeongsang, Park sent Dinos starter Lee Tae-yang’s 134 kilometer-per-hour (83 mile-per-hour) fastball over the left fence in the fourth inning to mark his 50th home run of the season.

In KBO history, only three players have had 50 or more home runs in a single season.

“I went up to bat without thinking about getting a home run, and that’s why I did well,” Park said. “I feel happy that my team won in the same game that I set a new record.”

Although Park is now in possession of the historic record, he doesn’t have his actual home run ball. The two-time KBO MVP knocked the ball out of the park, and someone picked it up before stadium employees could retrieve it.

“The person disappeared as we got there, so we couldn’t get the ball back,” said a spokesperson on the Heroes’ public affairs team. “Even if the person who has the ball contacts our team later, it is hard to prove that the ball is really Park’s 50th home run ball.”

Park said he feels a little sad that he can’t get the ball back, but he knows there are more important things to worry about pursuing.

Park will be first aiming to break his personal home run record of 52 before going for Lee’s single season record of 56.

The Heroes, which are sitting third in the league, have 10 games left to end the regular season. They will have a two-game series against the SK Wyverns at their home Mokdong Baseball Stadium in Seoul starting Wednesday.

As of Monday, Park was five runs ahead of the Lions’ Yamaico Navarro, which makes him closer to taking the home run title again. Park is also No. 1 in RBIs at 138, leading Navarro by eight.

If Park maintains the lead until the end, he will be the first player in KBO history to win both categories for four consecutive seasons.

Despite his ever-growing list of record achievements - and the increasing attention of Major League Baseball scouts this season - Park has stayed humble.