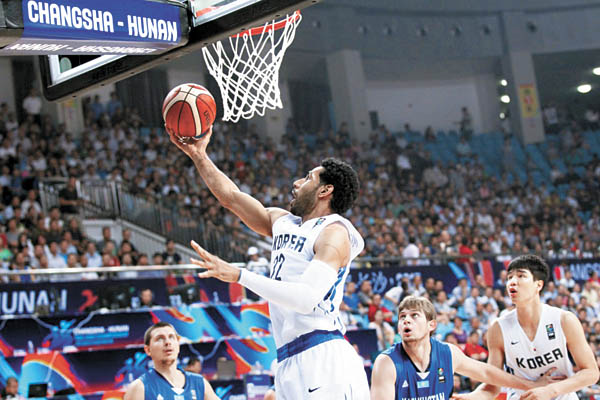 Korea’s Moon Tae-young goes up for a shot against Kazakhstan during the FIBA Asia Championship in China on Tuesday. Photo by fiba.com

The Korean men’s basketball team is looking for its first appearance in the Summer Olympic Games since 1996, and today, it has its best shot so far.

At the FIBA Asia Championship, the national squad faces defending champion Iran in the quarterfinals, with the winner of the tournament going straight to Rio de Janeiro.

At the event held in Changsha, China, the second to fourth-place teams have to go through the FIBA World Olympic Qualifying Tournament to earn their spot at the Olympics.

This means that a victory in the quarterfinals is essential.

Korea, led by coach Kim Dong-kwang, finished its second round qualifiers at the FIBA Asia Championship on Tuesday. After beating Kazakhstan 79-63, the team settled for third place in Group F with three wins and two losses.

For Korea, which is ranked 28th in the world, an unexpected 69-63 loss against Qatar on Monday was critical.

Making things worse, Iran lost 87-73 to the Philippines and settled for second place in Group E, making them an unexpected opponent for Korea in the quarterfinals.

Iran, ranked 17th in the world, is considered the top basketball nation in Asia. The team has won three of the last four FIBA Asia Championships.

Along with the 2.18-meter (7-foot-2) center Hamed Haddadi, who had a brief stint in the NBA with the Memphis Grizzlies and Phoenix Suns, Iran is powered by forward Samad Nikkhah Bahrami and guard Mehdi Kamrani.

In their most recent match-up at the William Jones Cup in Taiwan in August, Korea lost 77-46 to Iran.

Korea did well against Iran last year in the Asian Games in Incheon, beating the squad 79-77 in the final to win gold.

However, Korea’s squad is a little different from last year.

Although players like Yang Dong-geun, Cho Sung-min, Cho Sung-min, Kim Jong-kyu and Lee Jong-hyun are still with the team, other core members like Kim Joo-sung, Moon Tae-jong, Kim Sung-hyung and Oh Se-keun have not been selected for this tournament.

Instead, young bloods like Moon Seong-gon, Kang Sang-jae and Choi Jun-yong - all college students - are to fill their void.

Experts predict a tough game for Korea and suggest that rebounding more effectively will be critical.

“What’s important is that we don’t have to be afraid against Iran,” coach Kim told local reporters in Changsha after the Kazakhstan game on Tuesday. “We will have to face the team anyway. If we do our best, we will do well.”

If Korea beats Iran, the squad will face the winner of the semifinals match between China and India.