No regrets for FC Seoul coach

No regrets for FC Seoul coach 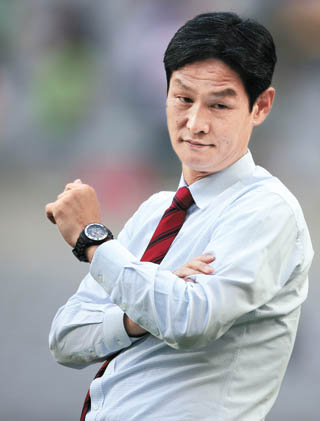 In late June, FC Seoul fans were agitated by news from China that coach Choi Yong-soo would go to the Chinese club Jiangsu Sainty.

Many fans first thought it was just a rumor, but when specific numbers came out from the Chinese media - which reported Choi would sign a two-and-a-half-year contract worth 6 billion won ($5 million) - things seemed serious. But on July 3, Choi wrapped up the issue by announcing that he would not leave FC Seoul.

The announcement marked a turning point for the 44-year-old coach. Before the news came out, Choi had been heavily criticized by fans because his team was eliminated in the Round of 16 in the AFC Champions League and had also lost 5-1 to the rival Suwon Samsung Bluewings in April.

After confirming his stay with the club, however, Choi’s reputation has changed. While FC Seoul has climbed up in the league standings, Choi has been praised by fans who have dubbed him the “man of loyalty.”

Before June, Seoul was ranked 10th in the league, but the team has since climbed to fifth, securing a spot in the upper group of the K-League Classic’s split system.

In an interview with Ilgan Sports, an affiliate of the Korea JoongAng Daily, Choi spoke about his feelings on the Jiangsu offer and its aftermath. Ironically, the interview was conducted in a Chinese restaurant.

Choi, a prolific striker in the 1990s who has been nicknamed “The Eagle,” admitted that the offer was sweet but said in retrospect that he’d made the right decision not to sign. The former JEF United and Jubilo Iwata player said he has a long career in football ahead of him that is worth more than 6 billion won.

Q. Before you were offered the Jiangsu contract, Seoul fans were calling for your resignation. Some even held up banners during games that read “Eagle Out.”

A. I saw that. It made me look back on what I’d done. I accept every criticism and blame because I think that’s also one of my duties as a coach. I heard many fans tell me to quit the job. I had no problem getting fired, but my pride couldn’t accept that. So I decided to become stronger. I couldn’t step back.

How did you respond to all the criticism?

I looked back on my 33-year football career. I have never taken a rest and never fallen down from exhaustion. So I thought from the beginning. Looking at all my interviews from 2011, I discovered that I was the reason the team was having all these performance issues. I’m crazy about football, but I needed to change my mindset. But even when I did, things didn’t get better.

What was going through your mind when you first got an offer from Jiangsu?

It is true that I was self-absorbed and thinking about my achievements in the past with Seoul. My ambition was to conquer the Asian stage. The salary that Jiangsu offered was something I couldn’t just ignore, and it was brought to me when I was going through a difficult time. I won’t deny that I was shaken by the offer.

You could have been the most expensive Korean coach if you had accepted the deal. What do you think about the contract?

I was thankful that Jiangsu evaluated me well and gave me the opportunity to broaden my coaching career. I think it showed that K-League coaches can go beyond Asia and Europe.

It wasn’t an easy decision. I heard advice from many people, even those who aren’t in football. My answer in the end was that I have to look further ahead. I thought that this wasn’t the right time. In my 33-year football career, I’ve never gone for the money. I think money needs to follow my values and isn’t something I have to follow. I think money reacts to hard work and effort. Money can shake people’s hearts, but it can’t buy them. I couldn’t sell my career for money.

Were you also pressured to leave the team in the middle of the season?

If I quit, it could have left a dark spot on my coaching career because it would have been seen as leaving without taking responsibility. I’m confident that I have to build up my career in the K-League. I couldn’t also betray my players who trust me. I grew up with Seoul and have gotten a lot from the team. I have a debt to repay to Seoul. You can lose money, but you can’t lose people.

Now you are called the “man of loyalty.”

I heard fans chanting my name in the stadium, and few seem to criticize me anymore. Instead of calling it loyalty, I would say it’s about faith. My pride comes from faith. The faith among the club, players and fans should be kept.

The team’s performance straightened up after you decided to stay. What happened?

When I decided to stay, it brought me back to where I’d been before. I didn’t feel chased or rushed. Players carried out the orders better than before. I told them I got a better opportunity because of them all, and I thanked them.

Do you regret your decision?

Not 1 percent. I knew going to Jiangsu wasn’t my way, and I made my decision. I even thought the offer could have been bait from the heavens to test me. I could have been destroyed if I grabbed that bait. I’m not a coach worth 6 billion won. I will be focusing on the present to open the future.

What would have happened had you signed with Jiangsu?

I probably would have bothered Sergio Escudero [who moved from Seoul to Jiangsu earlier this season] (laughs). If I had 6 billion won in my hand, I would have been living as a different man. My passion for football could have gone down, or I could have forgotten about fans’ support and affection.

What would you do if you get a similar offer after this season?

I will let heaven decide it. I don’t know if there is going to be another opportunity or not. But what’s certain is that I will be placing all my bets on Seoul. There is nothing to think about other than leading Seoul to the top three and the FA Cup trophy. That’s the same after the season is over. I will be thinking about FC Seoul’s next season.