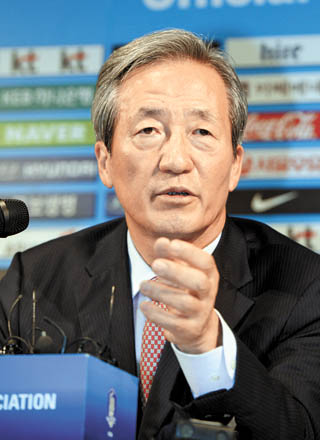 FIFA presidential candidate Chung Mong-joon says he is being targeted for suspension from the ethics committee. [NEWSIS]

FIFA presidential candidate Chung Mong-joon yesterday said the ethics committee of the world football governing body was a “hitmen” for current president Sepp Blatter and claimed he is in line to be suspended from the committee.

At the press conference in Seoul on Tuesday, Chung, 63, said FIFA has launched a scheme to give him an “unreasonable” suspension in order to prevent him from registering as a FIFA presidential candidate.

The election is set for Feb. 26, and those who want to replace Blatter, who is currently targeted by Swiss and U.S. authorities over a corruption scandal, should be nominated by Oct. 26.

“The reason why I am being targeted is that I aimed straight at the existing power of FIFA,” Chung said. “Ultimately, I will prevail and will be vindicated.”

It was reported that FIFA’s ethics committee is probing Chung’s donations to Pakistan and Haiti in 2010, which Chung said was a charitable donation to a disaster relief fund. Chung is a major shareholder of shipbuilder Hyundai Heavy Industries

The committee is also looking into Chung’s written proposal to FIFA members in 2010 to create a global football development fund worth $777 million. The committee believes this was part of his bribing scheme to secure Korea’s 2002 World Cup bid.

Chung, who has been serving as the FIFA vice president for 17 years, said FIFA’s ethics committee is seeking to give him a 15-year suspension for his allegations and an additional four years for criticizing the ethics committee.

“This is disappointing, but it’s not a surprise at all,” he said. “Although there will be pressure from FIFA, I will try my best to register my candidacy by Oct. 26.”

Chung, a former lawmaker and one-time candidate for Korean president in 2002, claimed the ethics committee was targeting those who challenged the 79-year-old Blatter who has been leading FIFA since 1998. He said the committee is attacking him based on testimony from Blatter and Jerome Valcke, who is now suspended as FIFA secretary general, but never showed the full text of their testimony.

Chung, describing the ethics committee as Blatter’s “hitmen,” said he doesn’t have any expectation of the committee’s hearing, which is expected to be held this week.

“I told them if Blatter is coming out for the hearing, I will attend it,” he said. “But they dismissed my reasonable request and started investigating me while setting the frame.”

Chung said the situation is not only sabotaging his candidacy but also destroying the presidential election and FIFA itself. The Korea Football Association honorary president added that the election is in danger of turning into a “farce.”

“As preposterous as it may sound, there are media reports that Mr. Blatter plans to stay on as president once all the presidential candidates are forced out,” he said.

Chung, who is scheduled to speak at a “Leaders in Football” seminar in London today, urged the international community to pay more attention to FIFA’s situation and lamented that no football association or confederation had asked Blatter to retire.

“Whether or not I can maintain my candidacy is up to the healthy conscience of the international community,” he said.