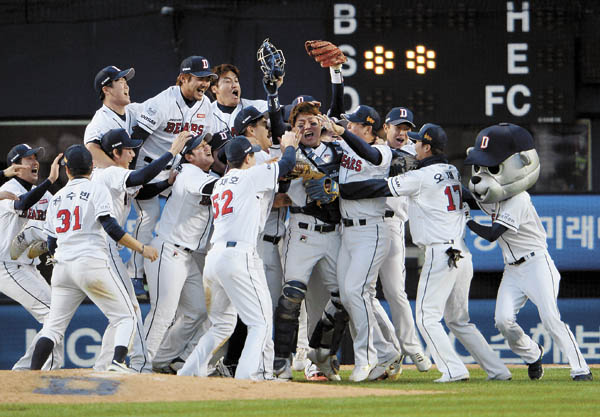 The Doosan Bears players celebrate after winning the Korean Series against the Samsung Lions at Jamsil Baseball Stadium in southern Seoul on Saturday. [NEWSIS]

The Doosan Bears finally lived up to their nickname “Miracle Doosan” after they wrapped up the best-of-seven Korean Series in 4-1 by smashing the Samsung Lions 13-2 on Saturday at Jamsil Baseball Stadium in Seoul.

This was the Bears’ fourth Korean Series title in their history, after winning in 1982, 1995 and 2001. Coincidently, the Lions were also the Bears opponent in the 2001 Korean Series.

Since 2001, the Bears went to the Korean Series four times, but they always finished as runner-up. However, the 14-year drought finally ended over the weekend. After suffering a 9-8 away loss in Game 1, the Bears went on to win four straight games.

The victory especially vindicates the Bears’ painful memory from two years ago when they lost to the Lions in the 2013 Korean Series even though they were leading the series by 3-1 before losing three straight games.

The Bears, who finished third in the regular season, had to reach the Korean Series by beating the Nexen Heroes and the NC Dinos in the postseason. They played nine games before facing the Lions, which was thought to be a disadvantage for player stamina.

However, player mentality was strong. While some players who had struggled in the regular season shined when the team needed them most, those with injuries gave their best.

Outfielder Jung Soo-bin didn’t play the first two games because his left finger was hit by a pitch in Game 1. But from Game 3, the 25-year-old was on fire, going 6-for-11 with 4 RBIs. In total, he averaged .571 throughout the series to be named MVP.

“I think our deep sorrow of finishing second was washed off today,” he said. “I think the players united together more than we did in 2013, and that’s why we felt comfortable until the end.”

Catcher Yang Eui-ji had a right toe injury after he was hit by a foul ball during the playoff series against the NC Dinos. However, he took painkillers to lead the Bears to the championship series, starting all five games.

Nippert collected two wins against the Dinos in the playoffs to lead the Bears to the championship series, and again delivered the victory in Game 2 with a seven-inning shutout. The 34-year-old American set new postseason record in the KBO by not allowing a single run in 26 2/3 innings.

Lee, 32, played as an impressive closer to wrap up the games. Game 5 on Saturday was no exception.

“I dreamed about screaming as the last pitcher on the mound when our team wins the championship,” Lee said. “That miraculous thought became reality.”

For the Lions, it was a painful defeat as their dream of winning a fifth straight championship went unrealized.

But even more painful was the fact that their three core pitchers were left out of the series due to an illegal gambling scandal. With their batting power also diminished, the regular season champions were weakened.

However, the Lions were not sore losers. Usually, the runner-up in the Korean Series waits inside their dugout, and after the ceremony they bow to fans and leave the stadium. Instead, the Lions acknowledged their defeat and lined up in front of their dugout to applaud the champions during the ceremony.

“I would say we lost completely in this Korean Series,” said Lions manager Ryu Joong-il. “In the professional world, finishing second is miserable. We need to win and be champions again.”