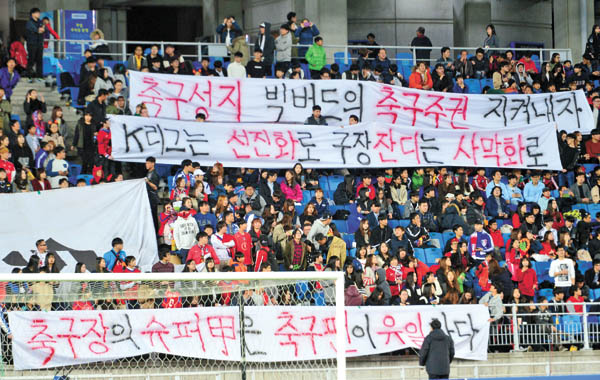 While the national team played on Thursday at the Suwon World Cup Stadium, a behind-the-scenes conflict over advertising rights spilled onto the stands.

Korea beat Myanmar 4-0 in the 2018 FIFA World Cup second round Asian qualifier. But amid cheers for the national players’, some fans waved banners that were unrelated to the action on the park.

The banners read, “Let’s defend the right of the Big Bird holy field,” and “Fans are the only super powers in the football stadium.”

The fans were expressing their frustration at friction between the K-League Classic club Suwon Samsung Bluewings, who uses the Suwon stadium as their home, and the Gyeonggi-do Suwon World Cup Stadium Foundation, which manages the stadium.

The team and the stadium management are in dispute over marketing rights at the stadium, known as “Big Bird” to fans.

The Bluewings claim they have full advertising rights when there is league match at home, while the foundation maintains it can also place ads because they manage the stadium.

The team says the biggest problem is that the foundation is selling and installing advertisements at the stadium separately, without consulting the team, which conflicts with club sponsors who are seeing ads from their rivals.

The foundation has been putting its own ads at the second floor stand of the stadium since 2004 without advising the team. This year, the foundation started to attach advertisements on the lower side of the electronic board.

Most recently, the foundation installed an LED ad board below the electronic score board. Management also reportedly lowered the ad price, which angered the Bluewings.

“The advertising price from the foundation is less than half of what we charge to companies,” the Bluewings official said. “It’s obvious which side the companies will choose to place their advertisement.”

“It’s sad that some people don’t have an understanding on how pro sports work,” Choi said.

The foundation lamented that it is being portrayed as an “evil group.”

“Under the (original agreement), there is no problem at all for the foundation to pursue advertisement business,” said Han Kyu-taek, the general director at the foundation. “In 2012 and 2013, we offered the marketing rights to the Bluewings for 850 million won, ($726,371) but they rejected it.”

If the Bluewings had accepted the 850 million won deal they would have had overall control of advertising at the stadium.

Sixty percent of the foundation is controlled by Gyeonggi Provincial government and Suwon City Government holds the remainder.

The Suwon deal is different from other agreements.

Clubs such as FC Seoul, Ulsan Hyundai and Jeonbuk Hyundai Motors, which also use the World Cup stadium in their region, pay 10 percent of ticket sales and their ad sales to the stadium management. As well, the clubs own full marketing rights on their match day.

“When pro sport clubs have the ability to survive on their own, it actually has a positive influence on each regional government’s financial situation,” said KBS football analyst Hahn June-hea. “There should be no selfish act from groups that are trying to steal the revenue source of the football club for their own short-term interest.”

To further confuse matters, the foundation does not place ads when there is an international match or AFC Champions League match at Suwon World Cup Stadium.

For example, for the 2018 FIFA World Cup regional qualifiers on Thursday, the foundation covered their ads with cloth and exposed official sponsors of the AFC.

As well, the foundation has been accused of not doing a good job of managing the stadium.

“The pitch condition of Suwon World Cup Stadium has not been good,” said the Bluewings coach Seo. “When we ask them to water or mow the grass, they often reject our request.”

The Ministry of Culture, Sports and Tourism in January said that to maintain a healthy marketing environment it is prepared to revise the regulations related to clubs renting stadiums.

Under the planned revision, which is still to be passed by the National Assembly, professional sports clubs are expected to take control of the stadium from regional governments for up to 25 years, which would include all advertising rights.

Suwon Mayor Yeom Tae-young said he would get involved to resolve the dispute. “The owners of the public facility are the citizens and the main actors for the World Cup Stadium should be football fans and the football club,” Yeom said. “I will talk with Gyeonggi Province Government and other related parties.”