Korea’s troubled road to the semi-finals

Korea’s troubled road to the semi-finals 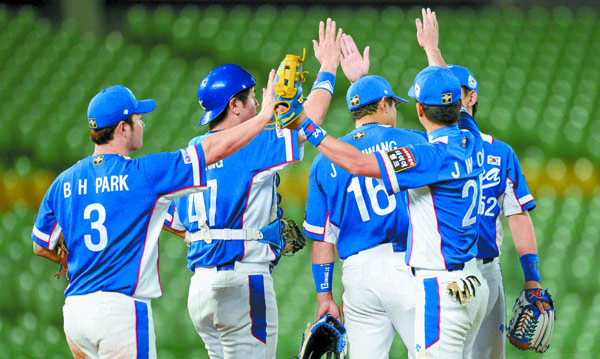 Korea’s national baseball team players celebrate after their 7-2 win against Cuba at the Premier 12 quarter finals on Monday at the Intercontinental Baseball Stadium in Taichung, Taiwan. Korea will now face Japan in the semi-final at Tokyo Dome on Thursday. [newsis]

As the Premier 12 baseball tournament moves to Japan for the final three games, the Korean team is hoping their problems, on and off the field, are
behind them.

Korea, ranked eighth in the world, reached the semi-finals after beating No. 3 Cuba 7-2 on Monday. The team, led by manager Kim In-sik, will now have a chance for revenge against No.1 Japan in the semi-final on Thursday at Tokyo Dome. The two countries clashed in the opening game of the inaugural international baseball tournament at the Sapporo Dome on Nov. 8, when Korea lost 5-0.

At first glance, Korea seems to be enjoying the World Baseball Softball Confederation (WBSC) tournament. But through their semi-final run, the team has suffered various problems due to the flawed management of
organizers.

While all the other participating teams began their tournament action in Taiwan, organizers thought the rivalry between Korea and Japan would be a high-profile launch for the tournament and scheduled only the first game to take place in Tokyo.

A fire at Tien-Mou Baseball Stadium in Taipei, Taiwan, on Sunday after the game between Korea and the United States, added to Korea’s problems. [newsis]

Korea was hoping for a change of atmosphere when they continued the tournament in Taiwan.

In terms of performance, Korea got what they wanted by beating Dominican Republic, Venezuela and Mexico before being defeated by the United States in Group B. However, in terms of game organization and environment, the team says it was a nightmare.

For the second game in Group B last Wednesday, Korea was scheduled to play the Dominican Republic at 7 p.m. (Korean time) at Taoyuan Baseball Stadium after Venezuela and
the U.S. played their game at the same venue at 1 p.m.

But the rain halted Venezuela-U.S. game for two hours - and forced Korea’s game to be played 50 minutes later than the original start time.

Organizers told Korea and Dominican Republic that if Venezuela-U.S. game ended after 6:20 p.m., the two teams will have to start their game immediately without on-field warm-up exercise or batting practice.

Although there was a small practice field next to the stadium, it was not open and Korean players eventually had to warm up in the hallway of the stadium.

“It felt like we were in the 1980s,” batting coach Lee Soon-chul said.

And while Korea’s professional players went through stretching exercises in the hallway, organizers changed the start time again. They said that if the Venezuela-U.S. game ends before 6:45 p.m., Korea and Dominican Republic would start their game at 7:30 p.m., and if the previous game is completed after 6:45 p.m., the two sides would start at 8 p.m.

Since the Venezuela-U.S. game - which was played with a broken electronic scoreboard caused by the rain - ended before 6:45 p.m., Korea assumed its game would start at 7:30 p.m. as previously directed. But organizers again changed the stating time, saying the game would start 7:50 p.m.

Players, already tired of the frequent schedule changes, had to re-adjust their warm up program.

“I was fed up the starting time got pushed back as I finished my warm-up,” said Jang Won-jun who was a starting pitcher against Dominican Republic. “Why would the organizers just push back the starting time in the first place?”

The game ended just before 11 p.m. with a 10-1 Korea win. But the late finish meant that the exhausted players had little more than a 14 hour turnaround, before their next game against Venezuela, scheduled for 1 p.m. the next day.

And since Korea was designated as a home team in the Venezuela game, the team was assigned an earlier training time than Venezuela, forcing the players to leave their hotel for training at 8 a.m., only nine hours after they stepped off the field after beating the Dominican Republic.

To add to the team’s problems, players were shocked by the poor conditions at the Tien-Mou Baseball Stadium, where Korea faced Mexico and the U.S. over the weekend.

Second baseman Jeong Keun-woo claims he even found a rock on the field during a training session and outfielder Kim Hyun-soo wasn’t pleased with playing conditions.

“The light at the stadium was too dark,” said Kim. “It was like the minimum lighting which you can see during night-time batting practice at spring camp.”

Korea was also the victim of critical umpiring mistake on Sunday.

Tied at 2-2, Korea and the U.S. went to extra innings where the tournament’s tie-break rule applies. To start the 10th inning, each team puts two consecutive batters from anywhere in the lineup on first and second.

The Americans tried to move the runners over with a bunt from Adam Frazier, but pitcher Woo Kyu-min took it on a short hop and made a double play. With Bret Eiber up to bat, Frazier tried to steal second base and second baseman Jeong made a clear tag of him before getting to the base.

The video replay showed Frazier was out, but the second base umpire called it safe. Eibner eventually hit a single that allowed Frazier to score the final run of the game.

“It’s disappointing, but umpiring mistakes are part of the game,” Manager Kim In-sik said. “But I think we need to start reviewing plays in international tournaments.”

Tien-Mou stadium brought another surprise after the game as a fire broke out in the control room of the electronic board. Though the fire was quickly extinguished, it eventually affected the Korean team.

Premier 12 organizers previously announced that the quarter finals will be played on Monday, but as late as Sunday night they still had not confirmed the venue and game starting times.

With eight teams waiting to know which stadium they would be playing at and their game times, organizers released the schedule only 30 minutes after all the qualification round games were completed.

“We asked them every day about the tournament schedule, but they had no answers,” said Jeong Geum-jo, the head of operations at Korea Baseball Organization. “I’ve been to various
international tournaments, but this
is first time I’ve experienced these problems.”

In the original schedule, Korea, which finished third in Group B, was slated to face Cuba at the Tien-Mou stadium on Monday at 7:30 p.m.

But just an hour after the team was originally notified, organizers switched the venue to the Intercontinental Baseball Stadium in Taichung because they said Tien-Mou stadium couldn’t be used because the fire had damaged the electronic scoreboard. Cuba, which finished second in Group A, was already in Taichung, as its Group A games were held there. Korea, however, who were staying in Taipei, had to travel two hours to get to their quarter- final game.

As the tournament progressed so, too, did the scheduling turmoil.

While Mexico - who beat Canada 3-2 - and the U.S. - who beat Netherlands 6-1 - square off against each other in their semi-final game on Thursday, Korea was originally scheduled to play against the winner of the matchup between Japan and Puerto Rico on Friday.

But as Japan beat Puerto Rico 9-3 on Monday, its semi-final schedule moved to Thursday, while the game between Mexico and the U.S. was rescheduled to Friday. Since the final of the tournament is slated for this Saturday, Japan can have a day break if they reach the final.

This has forced Korea’s national team to change its flight to Tokyo. After taking a full day rest on Tuesday, they originally planned to leave Taiwan this afternoon and start training on Thursday to prepare for the semi-final on Friday. However, since the semi-final was abruptly moved to Thursday, the team decided to depart for Tokyo this morning.

Manager Kim, who previously led Korea in the Asian Games and two World Baseball Classic (WBC) events, lamented the frequent schedule changes. He criticized the organization of the tournament compared to the inaugural WBC.

“How come the schedule has changed so frequently?” Kim said on Monday. “In the WBC, we were able to have prepare before playing our games. I have never experienced this kind of tournament operation before.”