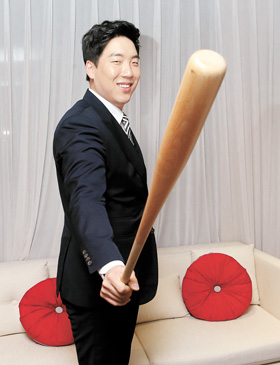 Free agent outfielder Kim Hyun-soo poses for a photo with his bat on Dec. 2 in Seoul. Kim, who was named the Premier 12 tournament MVP and awarded the KBO Golden Glove, is looking to play in Major League Baseball next season. [YANG GWANG-SAM]

This was an unforgettable year for Kim Hyun-soo.

As a cleanup hitter for the Doosan Bears in the Korea Baseball Organization (KBO), the 27-year-old helped his club win the Korean Series title in October for the first time in 14 years. In November, he led Korea to win the Premier 12 and was named MVP of the inaugural baseball tournament.

More awards followed. On Dec. 2, Kim was named recipient of the inaugural Cho-A Pharmacy Pro Baseball Grand Prize, and last week, he won the KBO Golden Glove award in the outfielder category. It was his fourth Golden Glove and first since 2010.

But Kim is looking for more. Before he ties the knot with his girlfriend in January, the 2008 KBO batting champion hopes to sign with a Major League Baseball (MLB) club for next season. He is currently a free agent.

According to the Baltimore Sun on Tuesday local time, the Baltimore Orioles have reportedly made a two-year offer with an annual salary between $3 million to $4 million.

Ilgan Sports, an affiliate of the Korea JoongAng Daily, met Kim earlier this month to ask about his bid for the big league and review his successful year.

Q. Did you know you would see these achievements when you started the season?

A. I never thought it would be like this, but I started the season knowing I would become a free agent after it ended. However, I did expect this year’s results would be better because I wasn’t raising my leg when I was batting. If you don’t raise a leg while batting, your accuracy improves.

Is that the reason why your slugging power got better?

I’m admitting this for the first time - I changed my bat during the season. Previously I’d been using a 34-inch, 870-gram (30-ounce) bat, but I felt that I wasn’t getting much speed in my line drives or when I tried to hit the ball to the opposite field. So I asked my agent to get me a bat from the United States that I’d seen used in MLB games. The new bat is 33.5 inches and 900 grams, which is shorter but heavier than my previous bat. But as I used it, I felt it wasn’t heavy and actually boosted my swing speed. This made a difference in getting home runs and doubles.

This was the first time you played as a cleanup hitter in the lineup. Did you feel much pressure?

Of course, I felt pressure because the cleanup hitter is symbolic to the team. For the Bears, Kim Dong-joo has been an example of how a cleanup hitter should be. My manager Kim Tae-hyung helped me a lot. This was my 10th year as a pro, and I talked to my manager more than any other season. He told me to take the role even though I’ve been doing well as the third batter in the batting lineup.

How do you overcome slumps during the season?

When I get into a slump, I go to batting coach Park Cheol-woo. When he asks me, “Are you ready to hit?,” I go to the field at 1 p.m. the next day and have a special two-hour batting practice session. But interestingly, I always made a hit in the game after the practice. This season, the coach asked me about five times to have that training. It was good experience for me.

Are you satisfied with your personal stats this year?

I’m satisfied that my slugging percentage [.541] got better. I also gained confidence that I can get better. I feel good that I found the right bat for me. I don’t have a bat sponsorship, so I have to purchase them on my own. I’ll have this bat more often when I go to the United States because it’s easier to purchase there [laughs].

Can you tell us about the Premier 12 victory?

You have to play when you are selected to the national team even if you are tired. I liked playing on the national team. My agent also told me that I should perform at the international tournament if I’m looking to play overseas. It was a very entertaining time, and I’m happy we did well.

Do you think your past 10 years with the Bears were successful?

Of course they were successful. I’ve always been with the first team roster, except in 2007 when I went to the minors. I became a free agent in my 20s, and now I’m preparing to go overseas. This is all because I was with the Bears.

When did you begin thinking about playing in the MLB?

I’ve been watching MLB games every day since I was a child. Ever since I first became a professional player, I’ve always wanted to one day play in the United States. People saw me hiring an agent as confirmation of my desire to go overseas. But the real reason I hired an agent was just so that I could play baseball comfortably.

I don’t support a specific team, but I did like Barry Bonds. I wondered, “How can he hit like that?,” and was just amazed by his performance.

If you go the MLB, is there a pitcher you want to face?

My focus will first be just to play in some games … [But] ever since I first started playing, I’ve respected former New York Yankees pitcher Mariano Rivera. He retired even though he still has talent to play more. He’s a really great guy. If he were still pitching, I would have faced him, but unfortunately I can’t.

So your goal is to play games there?

You learn something by playing the game. What’s important is how I can adjust nicely to the new environment. I thought about it, and I think I will have no problem. The U.S. has a sort of individualistic culture and I think that suits me. I also like eating hamburger and steak, so I’m not worried about food. When I decide to go the U.S., I have my own goals to achieve, and I don’t just want to give up. If I’m not good enough, I should admit the reality and get focused again. I don’t want to get embarrassed by returning to Korea after a failure.

Have you talked with the Pittsburgh Pirates’ Kang Jung-ho?

I talked with him frequently, and he said it’s pretty good to play here. I knew he would do fine in the MLB, and because he’s doing well, I think I got the opportunity.

How would you feel if you become a major leaguer?

It will be fun. I’m seeing players like Ryu Hyun-jin, Kang Jung-ho and Park Byung-ho in the United States. It will remind me of the World Baseball Classic. Back then, I was in awe after looking at players like Derek Jeter and Miguel Cabrera. I think people will compare my physique with other players. I will have to reinforce my winter training to get in shape.

If you go to the United States, how long do you want to stay there?

Honestly, I want to come back after I finish my playing career. If I really perform well, I don’t think MLB clubs will release me. People usually say athletes should wrap up their career in their homeland, but I don’t think about it that way. If I return, I am stealing a position from a young prospect. So if I had to return, I want to be a player-coach so that I can teach some of my knowledge and sometimes play as a pinch hitter to excite fans. I will not care about the salary. I want to use the money to help those in need like Park Chan-ho did.

Is there a nickname that you wish to be called in the United States?

What do you want to call a player who doesn’t get injured? “Iron Man” or “Hulk” will be fine [laughs]. I want to be a player who is a professional. I don’t want to sit and make money. My philosophy is that those who earn big money have to play in front of fans. Honestly, I was disappointed with some foreign players who previously played with us. I always play unless I’m really sick.

What can you say about your marriage in January?

First, I want to thank my girlfriend. I’ve had a lot to think about, trying to handle both getting married and transferring overseas. My girlfriend supported me playing overseas, which set my mind at ease. I also feel sorry because she prepared everything for the wedding. Having a family means having responsibility. Now, I have one more reason to have to work harder.