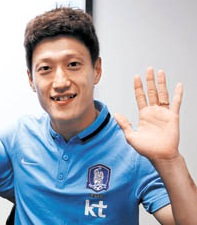 Lee Chung-yong delivered the winning goal in Crystal Palace’s 2-1 victory on Saturday over Stoke City. It was the first time in nearly five years the Korean midfielder has scored in the English Premier League.

In the match at Britannia Stadium in Stoke-on-Trent, England, Lee stunned Stoke City with a screamer from 25 yards in the 88th minute to maintain Crystal Palace’s winning streak. The London-based club has nine wins, two draws and six losses, and is currently ranked sixth in the league table.

Lee, 27, came on to the pitch in the 81th minute to replace Wilfried Zaha.

Both teams scored through a penalty, and the match continued at 1-1 until Crystal Palace placed a corner kick in the 87th minute. After a scramble in the box, in which Jordan Mutch misfired and Damien Delanie’s strike was blocked by a Stoke defender, the ball rolled just outside the penalty area, where Lee beat out Stoke goalkeeper Jack Butland to land the kick.

“I think it’s my best goal in the Premier League,” Lee was quoted as saying on the Crystal Palace website. “I only had 10 minutes to do something, but I wanted to score. I was a little bit lucky, but I’m happy with the result.”

Lee hasn’t scored in the Premier League since his goal against West Ham United in April 2011, when he was playing for the Bolton Wanderers. His goal in Saturday’s match was his first league goal for Crystal Palace as well as his first goal of the season. In the League Cup, he scored for the club in August against Shrewsbury Town.

“It was a really great technical goal because his control to hit that side-footed, with that power, against the wind, was amazing,” Crystal Palace manager Alan Pardew was quoted as saying on the team’s website. “It obviously brought the house down on our bench.”

The midfielder’s goal came at a time when Lee has struggled to get playing time. Before Saturday, he had only appeared in four matches this season as a substitute.

Pardew previously said that the club was looking to slim the squad this winter, and Lee’s spot was considered chancy due to old injuries and impressive performances by his competitors, Zaha and Yannick Bolasie.

But in just 10 minutes on Saturday, Lee solidified his presence, proving once again that he could still be valuable to the club, which he joined in February.

“I’m looking forward to the busy run of games,” he said. “Hopefully, I’ll get more time in those games.”

Pardew, the former Newcastle United manager who took over Crystal Palace in January, acknowledged that Lee had been unlucky not to have had more chances within the club.

“I brought him to this football club; he would have wanted more opportunities, but with Bolasie and Zaha filling those wide areas, he doesn’t get a lot of opportunities,” Pardew said, adding that Lee’s performance on Saturday had certainly impressed him.

“He can score goals, usually not from as far back as that, more of a taking people on and weaving his way through type of goals,” he continued. “I’m delighted for him. He’s one of the most popular players in our dressing room. The lads are absolutely delighted for him, and the goal will wake all of Asia up tonight.”

Lee, who is expecting a baby next week, first joined the Premier League in 2009 with Bolton.

He suffered a broken leg after a fierce tackle from Newport County’s Tom Miller during a preseason friendly in July 2011 and returned to the field in May 2012.

Lee joined Crystal Palace on Feb. 2, 2015, the deadline for winter transfers in the 2014-15 season, from Bolton, which was relegated to the second division after the 2011-12 season.