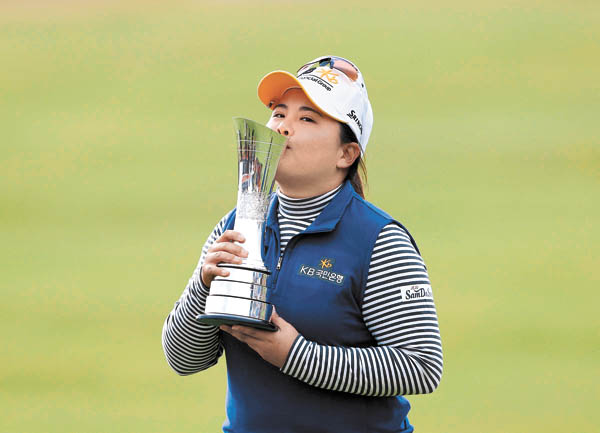 Although there were no major events like the Olympic Games or the FIFA World Cup this year, sports fans enjoyed watching their favorite teams and athletes, as well as the games themselves. While there were exciting and victorious moments, not all news was good this year. Here are the top 10 sports news stories from 2015 selected by the Korea JoongAng Daily.


Park In-bee has enjoyed various honors and victories in her career, but 2015 will be a memorable year for her as she became the first Asian golfer to achieve an LPGA career Grand Slam after winning the British Women’s Open on Aug. 3.

The victory in Turnberry, Scotland, made Park the seventh woman in golf history to win four different major tournaments, while becoming the third-youngest golfer - male or female - to win seven career major titles, after Tiger Woods and Mickey Wright.

Including the British Open win and the Women’s PGA Championship victory - which she claimed for the third straight season - Park this year collected five wins. In addition, the 27-year-old took the Vare Trophy, which is awarded to the player with the lowest scoring average for the season.

At the end of the season, the 17-time LPGA Tour winner gave up the Player of the Year title, prize money title and world No. 1 ranking to Korea-born New Zealand golfer Lydia Ko, but Park did earn enough points this year to enter the LPGA Hall of Fame. She will become the second Korean to enter the LPGA Hall of Fame after Pak Se-ri following the completion of her 10th active season on the Tour in 2016.

The dominance of Korean female golfers was also on display in Japan. With Lee Bo-mee setting a new prize money record with her seven wins, Koreans earned a combined 17 wins out of 37 events in the JLPGA Tour.