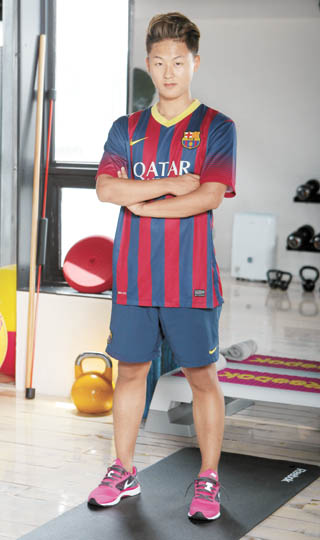 Lee Seung-woo has been waiting for today for nearly three years, as the footballer is finally 18 - meaning he’s free from a ban that has kept him from playing in official matches.

The Korean forward joined FC Barcelona’s youth team in 2011 and was quickly recognized for his skills, which were exceptional for someone of his age. But in February 2013, FIFA ruled that Barcelona had violated the transfer code for players under the age of 18, and suspended Lee and other foreign youth players from playing in official matches for the Spanish club. From September 2014, Lee was not even allowed to train with the team or stay at the club house.

However, Barcelona hasn’t given up its hopes for Lee. Last month at the FIFA Club World Cup in Japan, where Barcelona claimed the title for the third time after crushing Argentine club River Plate, Lee was invited to watch the match from the stands. The Spanish champions are also reportedly planning to make a documentary film about him.

Lee has been preparing himself, meaning Christmas and New Year’s were training days like any other.

“When I first heard that I couldn’t play, I thought it was a joke,” Lee said on Dec. 28 in an interview with the JoongAng Ilbo. “I had to accept the reality, but I can’t just sit and wait. With the goal of sharpening my fangs, I prepared thoroughly to be in shape.”

Lee left for Spain on Sunday. Although his place at Barcelona hasn’t been determined, he is expected to play between Juvenil A, the top-level youth team, and the Barcelona B team, the reserve squad for the club.

But things haven’t been easy for Lee. In Korea, he has been criticized by local fans for being arrogant and rude after his performances in national youth team matches.

“Lee has never shown tiredness since moving to Spain alone at the age of 12,” said Lee’s father, Lee Young-jae. “When I recently heard how much he focused on football in Spain, it was heartbreaking.”

At Barcelona, where top football prospects train, Lee has also been fighting racial prejudice. Some players asked him whether he is Chinese or Japanese, and Lee had to work hard at first to get passes from his teammates.

“One time, I even fought with an African player who called me ‘chino,’” Lee said. “[But] after I won MVP in an international tournament, my teammates started to pass the ball to me.”

In April, Lee faced scrutiny for kicking the advertising board during the national team match, which he said was because of his own dissatisfaction with his performance. Lee now realizes that some fans might feel offended by his behavior, but emphasized he hadn’t intended to make anyone uncomfortable.

“I haven’t ever been ejected for hitting someone or other kinds of truly bad-mannered behavior,” he said. “In other countries, players even fight with coaches.”

Despite the outbursts, Lee has maintained a strong fanbase in Korea.

“I think people like me because no player has characteristics like me. I think it’d be no fun if my daring attitude wasn’t apparent,” Lee said, laughing.

Some football fans have raised concerns about Lee’s small physique. He is only 1.7 meters tall (5-foot-7) and weighs 60 kilograms (132 pounds), but Lee says he’s only ever heard this criticism in Korea.

“People in Barcelona told me that if I was 1.8 meters or 1.9 meters tall, I could not have my current style of playing,” he said. “I only hear in Korea that my height is a problem, and that makes me confused about my physique sometimes.”

Lee even joked that because of Koreans’ stereotypes about height, if Lionel Messi - who is also 1.7 meters tall - was born in Korea, the four-time FIFA Player of the Year winner could have been a physical education teacher rather than a footballer.

People who have been closely watching Lee tell a different story about his physique.

“Many people think Lee is weak just because he has fallen to the ground,” said Lee’s personal trainer, Lee Jung-woo. “But he does have enough muscle to overcome the challenge of big players.”

In Spain, Lee has often been compared to his idol Messi. Lee says that comparing him with the Argentine forward is already an honor.

“Messi is like a player in another dimension that I can’t overcome,” he said. “In Barcelona, there is Neymar and Luis Suarez, but for me, Messi is the best among the stars.”

However, Lee said it’s about time for him to take off the tag of being “the next Messi” and build his own reputation.

“Going to the first team of Barcelona is really difficult, but I think it’s not an impossible task if I work hard,” he said. “From now on, I want to display my style of football freely.”