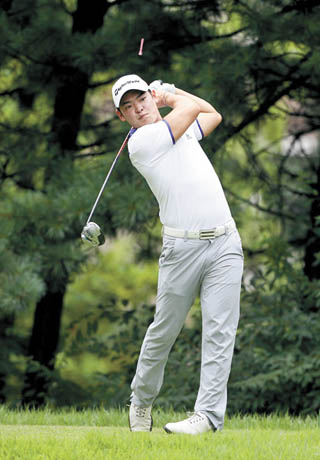 Born in Argentina, Martin Kim was first attracted to playing football, like most youngsters in the country. However, he didn’t like losing. But in team sports like football, an individual player can’t control the game.

At the age of 13, Kim started playing golf when he realized the result of the game depended solely on his own ability. Since then, he hasn’t looked back and has grown up to be one of Korea’s top players, at least for his powerfully long drive.

At the KPGA Award Ceremony on Dec. 17, Kim received the long driver title in his first year of the KPGA Korean Tour. The 27-year-old Korean-Argentinian is the first foreigner to win the driver title in the KPGA, averaging 294.54 yards.

“This is really a big honor,” Kim told the JoongAng Ilbo. “Although my game results aren’t good, I think it is praiseworthy that I did send the ball further than anyone else.”

After conquering amateur championships in Argentina, Uruguay and Peru and playing for the Argentine national team for eight years, Kim turned pro in 2013 and played in the OneAsia Tour before earning a full-time tour card for the KPGA Korean Tour.

Nicknamed the “Argentinian Hulk,” Kim hit a 501-yard drive at the Fiji International in the OneAsia Tour two months ago, which turned out be the longest shot of his career.

“Although there was wind from behind, I didn’t know that the ball would fly that much further,” he said. “It was a hole that has a downhill at 250 yards and uphill later. I didn’t see exactly, but I assume the tee shot hit the downhill and bounced over the uphill.”

After the 501-yard drive at the par-5 hole, Kim made his second shot with only 80 yards left and made it onto the green. Eventually, he finished with a par as he sunk the ball into the hole in three putts.

That was one of the examples of how Kim played golf last season.

Even though he can send the ball further and land on the green, bad putts have forced his name down on the leaderboard. Making things worse, he picked up a finger injury on his right hand during weight training in August and could not train for two months.

To play for the 2016 season, Kim had to enter the Qualifying School for the KPGA Korean Tour last month. But as the rainy weather canceled the last two rounds, Kim had to settle for 68th and earned a conditional tour card, which means he can only compete when some golfers drop out of the events.

Kim acknowledges his problem is his putt. His average number of putts per green is 1.84, which is ranked 83rd in the tour. Though his number is only 0.1 behind No. 1 Son Joon-eob, when it comes to 72 holes, Kim is nearly eight strokes behind the leader.

“I’m doing a lot of putting practice, and I believe it will be better,” he said. “I will also focus on improving my mind control as I feel pressured and my body gets nervous.”

Kim’s forte is obviously the long drive. He said his abdomen and back muscles are the driving power of his drives, while his fast swing speed also helps. According to him, his club head speed can reach up to 124 miles per hour.

His power may be inherited from his father, who was a boxer. Kim said he also learned boxing training programs from his father and started weight training when he was 13.

“I’ve been working out steadily since my childhood,” Kim said. “In order to increase muscle power, I installed a chin-up bar in my house and do 35 chin-ups at once.”

Personally, Kim’s first task is to live independently from his parents. Although he left his parents’ house three years ago, Kim admitted he is still receiving money from his parents because the revenue from the prize money is not big.

Kim is focusing on winning the KPGA Korean Tour and then going to the U.S. PGA Tour. He hopes to become like Argentine golf great Angel Cabrera, who won the 2007 U.S Open and 2009 Masters.

“You never know when your golf plays well,” he said. “Golf is a sport where you need to have a good score, so my priority is to get good scores instead of just sending a long drive. I have belief that I can play in the U.S. one day.”