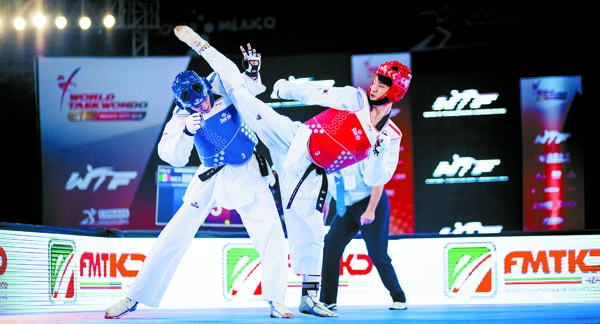 Lee Dae-hoon, right, kicks his opponent during the World Taekwondo Grand Prix final last year in Mexico City. Lee has already secured his spot in the 2016 Summer Games in Rio de Janeiro and will aim for his first Olympic gold medal. He won the silver medal at the 2012 Summer Games in London. [WORLD TAEKWONDO FEDERATION]

That’s the day he lost to Spain’s Joel Gonzalez Bonilla 17-8 in the men’s 58-kilogram division final of the 2012 London Olympics and settled for silver. At the time, Lee was aiming to become the youngest Korean taekwondo athlete to achieve the sport’s Grand Slam after topping the 2010 Asian Games, 2011 World Taekwondo Championships and 2012 Asian Taekwondo Championships.

Now 23, Lee has lost his chance to claim the title as the youngest athlete. But he still hasn’t given up on the Grand Slam as he guns for gold in the 2016 Summer Games in Rio de Janeiro.

Looking back on his performance four years ago, Lee regrets the excessive diet that pulled him down at the end. In order to meet the Olympic weight class - which is different from the Asian Games and Worlds - he decided to compete in the 58-kilogram division, five kilograms less than his usual weight. But going on a diet was physically challenging, and his stamina ran out after going through two overtime bouts.

“To take advantage of my [1.82-meter height], I lowered my weight class, but it turned out to be a failure,” Lee said, reflecting on his first Olympics appearance. “For the upcoming Olympics, I want to compete in a higher weight class while eating comfortably.”

Lee, who also won gold in the 2014 Asian Games, started taekwondo at the age of 5 because of his father Lee Joo-yeol, who ran his own taekwondo academy. For the junior Lee, Olympic gold was always a lifelong dream.

When he was in his second year of middle school, Lee had to write his own epitaph for a homework assignment. According to Lee, he wrote, “As a taekwondo national team member, I won three consecutive Olympics - in 2012, 2016 and 2020 - and died at the age of 99.”

Lee worked zealously toward his goal - even becoming ambidextrous to gain an advantage. He originally only used his right hand and foot, but he trained hard to build up use of his left foot and hand.

“After he fell in a slump, he ate with his left hand and used his left foot,” Lee Joo-yeol said. “Even though he spilled food while eating, he was eventually able to use his left hand smoothly after just a year.”

Learning from his second-place finish at the 2012 Olympics, Lee has been competing since 2014 in the 68-kilogram division and is now the world No. 1 in his weight class. After winning the World Taekwondo Grand Prix in Mexico last month, the two-time World Taekwondo Federation (WTF) male athlete of the year secured his spot in the 2016 Summer Games.

As Lee prepares for the big event in August, one new development in the sport may work in his favor.

In order to improve its scoring system, the WTF introduced electronic body protector equipment four years ago in London. They were first praised for their scoring accuracy, but controversy soon arose because light tapping could also lead to points. The WTF is now upgrading the system so that only accurate and powerful attacks can be counted for points, a plus for Lee, who is known for his powerful hits and high techniques.

However, the road to gold will not be a walk in the park. In the 68-kilogram division, Lee will have to outperform other top taekwondo athletes including Belgium’s Jaouad Achab, Russia’s Alexey Denisekno, Mexico’s Saul Gutierrez and Turkey’s Servet Tazegul.

Lee will also have to face Gonzalez Bonilla, the Spanish rival who cost him his Grand Slam goal four years ago and has since also moved up to the 68-kilogram division.

“Since I changed my weight class, my advantages in physique and power may have gone down, but I have gained a lot of confidence after playing against top-class athletes in international tournaments,” Lee said. “I’m working hard to increase my weight without influencing my speed.”

Lee hopes his hard work will pay off in Brazil. On Jan. 14, at the Korean athletes’ training kickoff ceremony for 2016 at the Taeneung National Training Center, he vowed to improve over his performance from four years ago.

“I still have regrets that I couldn’t show my best in London,” Lee said. “Now, I want to show a performance where fans can feel, ‘wow this guy really worked hard.’”