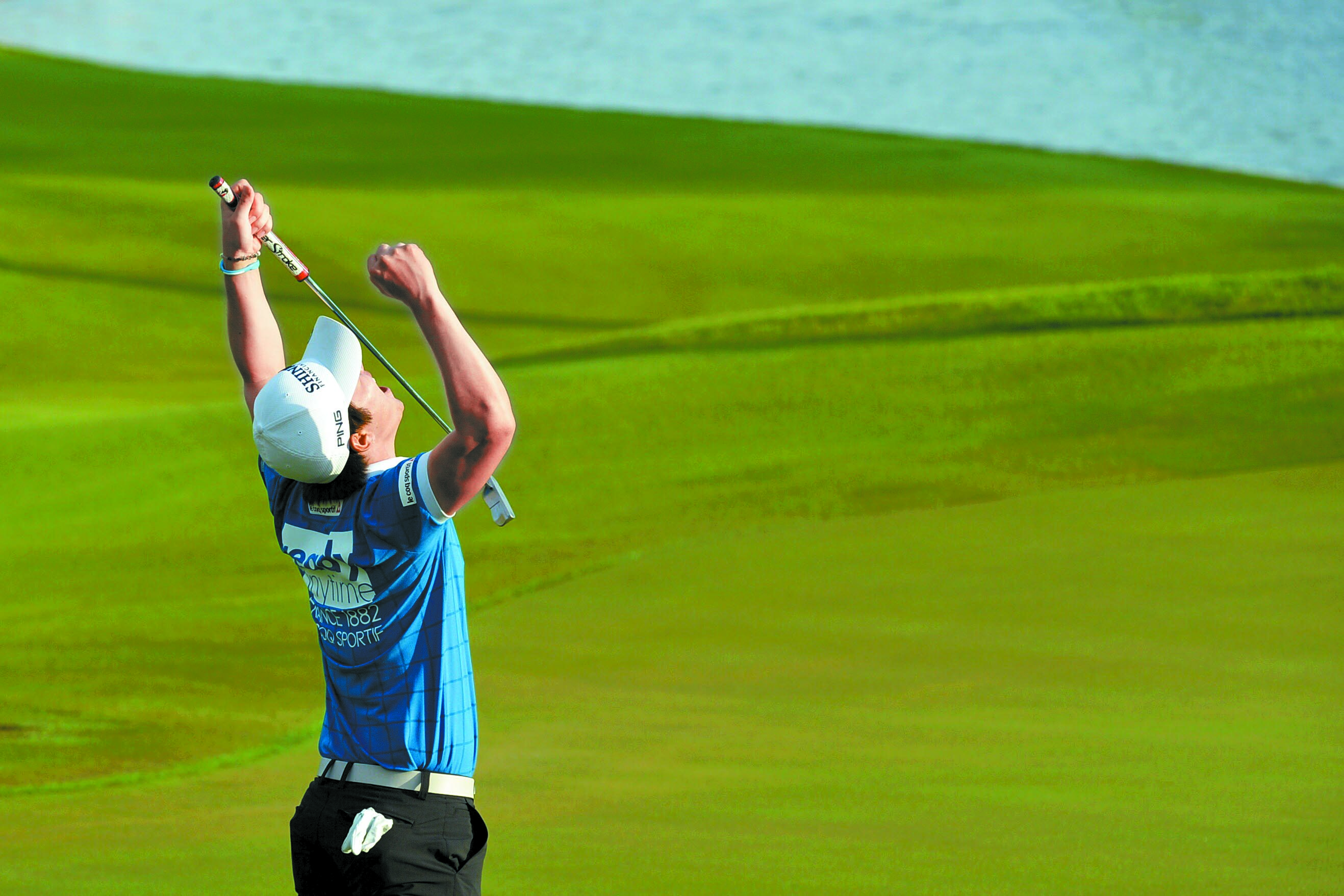 Song Young-han expresses his excitement as he wins the Singapore Open on Monday, defeating the world No. 1, Jordan Spieth. This was Song’s first win in his professional career. [XINHUA/NEWSIS]

SINGAPORE - Jordan Spieth finished runner-up at the Singapore Open on Monday after South Korea’s Song Young-han held his nerve to beat the fast-finishing world number one by a single stroke.

Among 13 players back at Sentosa Golf Club at the break of dawn after Sunday’s final round was suspended because of a thunderstorm, Spieth sank a five-foot birdie putt on the last hole, where he had marked his ball overnight, completing a final round of 5-under 66 to finish at 11-under 273.

Song, resuming on 12 under and playing two groups behind Spieth, drained a tricky 12-foot par putt on the 16th then made par at the last two holes to win the co-sanctioned Asian and Japan Tour event.

China’s Liang Wen-chong, who completed his final round on Sunday, finished outright third at 10-under. 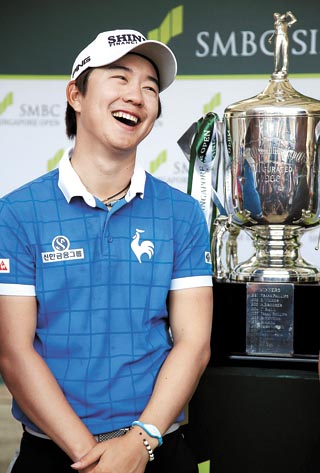 Song is obviously elated during an interview after his win over Spieth in the Singapore Open. [AP/NEWSIS]

“I had my first perfect round today,” Spieth joked about his one-shot day. “Everything was absolutely perfect. I didn’t miss one shot and I made everything I looked at.

“It was tough to sleep on that putt. Even though it wasn’t the most challenging putt, it was still a very nerve wracking one to hit knowing that you have to make it for what you think will be a playoff.”

Ranked 204th in the world, Song had led the tournament from the second round and was five in front of Spieth heading into the final round but had to retain his composure in the closing stages as the American narrowed the gap.

The 24-year-old said he had a restless night thinking about the putt on 16 and spent hours practicing the shot in his hotel room.

“I felt like I was going crazy,” he said, speaking through a translator. “The putting line wasn’t that bad but the situation made me nervous.”

Normally one of the best putters in the game, Spieth had struggled on the greens all week in the stifling humidity of Southeast Asia. But the 22-year-old got his game together in the final round to mount a late challenge, reeling in six birdies to put pressure on Song, who was chasing his first win as a professional after two second-place finishes on the Japan Tour.

Song managed just two birdies in his final round of 70 and dropped a shot at the seventh after an erratic drive but made a string of clutch saves to par the last seven holes, finishing with a simple tap-in at the 18th to secure the title and deny Spieth a chance of a playoff.

“I fought hard in the final round but I was just a little bit too far back,” Spieth said. “I missed a few putts (earlier in the tournament) that I normally make.”

“I had a lot of tough breaks. You have them both ways but this was one week where we definitely got the bad end of some bounces.

“My game’s pretty close. I held it together pretty solid but I didn’t have as many looks as I normally have on a weekly basis and that led to a little bit of a lack of trust in the reads.” AP