‘Ice Queen’ turns up the heat to recapture her title

‘Ice Queen’ turns up the heat to recapture her title 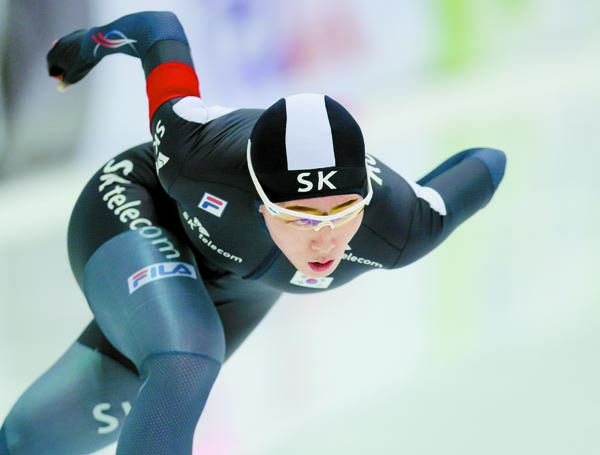 Lee Sang-hwa’s tenacity and determination have paid off after months of setbacks and disappointment.

She has returned as the ‘Queen of the Ice’ after reclaiming her title in the speed skating world championship. The 27-year-old won a gold medal in women’s 500m event at the 2016 International Skating Union (ISU) World Single Distances Speed Skating Championships in Kolomna, Russia, on Feb. 13th.

After her win, she said, “I could not train sufficiently after the Sochi Olympics due to injury and poor condition. I am happy to be back on the top. I trained hard since my recovery to recapture this title.”

Lee was disqualified from the World Cup selection in Oct. 2015 after she removed an armband during a national team qualifier race. An armband is used to distinguish skaters from the inside lane to outside lane. It is against Korean Skating Union regulations to remove the band arbitrarily.

She was only allowed to attend the World Cup after the KSU gave her a second chance because of her previous achievements. “I consider those times part of the training process,” said Lee about her disqualification. “It was tough but I am glad I endured it.”

Her overall record after the two runs in Russia stood at 74.859 seconds, about 0.80 second ahead of Brittany Bowe from the United States who took silver in the event. This is Lee’s third 500m ISU Championship, following wins in 2012 and 2013.

The first round was essentially a battle between Lee and Zhang Hong of China. Lee, who started the race from the inside lane, raced 100m in 10.29 seconds, the best record among 24 skaters and 0.51 seconds ahead of her rival Zhang. Thanks to her explosive start, Lee outpaced Zhang completely by the 2nd corner. Although Zhang tried to narrow the gap, Lee managed to maintain her position without much difficulty and finished the 1st round in first place at 37.42 seconds. Zhang’s time was 37.78 seconds.

Lee has reigned over the 500m speed skating race since the 2010 Vancouver Olympics. Although she finished second in 2011 ISU Championship, she clinched the title in 2012 and 2013. Lee’s gold medal from the 2014 Sochi Olympics made her the third
person in the speed skating history
to claim the 500m title twice in the Olympics.

Lee began to slide in 2015 when she finished 5th place at the ISU Championship due to her knee injury and poor physical condition. But her return was imminent as she brought home four golds from the 2015-2016 World Cup series after her recovery from the injury. She even broke the Korean record in 500m event prior to the ISU Championship during the National Winter Sports Competition in Feb. 2nd with 38.10 seconds.

The fact that Lee fended off Zhang in Russia makes her win even more significant. Zhang’s sudden appearance has grabbed the world’s attention after she claimed four gold medals from the 2015-2016 World Cup series, the same record as Lee.

Zhang also stands at No.1 in the world ranking with 10 points more than Lee who is currently ranked at No.2. Among the six matches that Zhang and Lee have competed in so far this year, Zhang defeated Lee on four occasions. Because of the intense rivalry between the pair, the ISU chose Women’s 500m event as the most competitive match in this year’s ISU championship.

However, Zhang was no match for Lee in Kolomna. Forfeiting the 1,000m event in preparation of the 500m race, Lee took care of her condition the day before the race by going through a simple warm-up routine. Thanks to her determination, she overpowered Zhang in the match that decided the ultimate winner of 500m this season. Lee plans to return to Canada to prepare for the World Cup final in March.