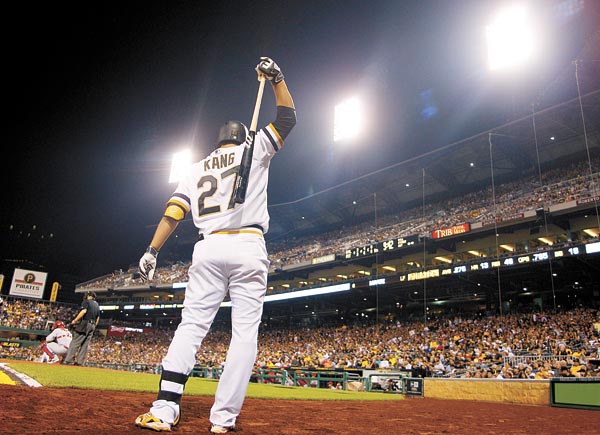 As Pittsburgh Pirates slugger Kang Jung-ho returns to the plate from his injury for the upcoming season, he is expected to play a key role in the success of the franchise on and off the field. [JOONGANG PHOTO]

For MLB Pittsburgh Pirates owner Robert Nutting, Kang Jung-ho is someone “absolutely necessary” for the team’s success in the upcoming season.

The Pirates’ 2016 Spring Camp officially started on Tuesday at McKechnie Field in Bradenton, Florida, and Nutting made his appearance on the first day of the camp.

One of the first people Nutting talked to was Pirates shortstop Kang. While it is a rare sight for an owner of a franchise to chat with a player, the conversation between Nutting and Kang seemed anything but awkward. After talking to Kang, Nutting went on to talk with the Pirates Manager Clint Hurdle and the coaching staff before leaving the training center. Nutting didn’t talk to any other players.

Nutting, along with the Pirates General Manager Neal Huntington, has been leading the franchise since he became the sixth owner of the Pirates in 2007. He was once named in a list of “worst franchise owners” in 2007 by Sports Illustrated magazine. His reputation seemed to be in line with the Pirates performance then. From 2007 to 2010, the Pirates were stuck in bottom position in the National League West division. However, as the Pirates made progress, his reputation improved.

The Pirates were ranked second in the division and repeatedly made appearances in the post-season over the past three seasons.

Nutting made the decision to sign a contract with Kang straight from the KBO for $11 million.

When asked about Kang, Nutting said, “Kang is an absolutely necessary player for the franchise and its success in the next season. I cannot wait for his return. It is very exciting.

“Kang will assume a big role in and out of the field,” said Nutting. “If we go all the way to the National League Championship Series, then I have no doubt that Kang will play a huge part in the process.”

Although Nutting is anxiously waiting for Kang to step on the field, he knows that Kang’s full recovery comes before anything else and is willing to be patient.

Such exceptional treatment by the owner is a flattering gesture as well as a great honor for a player who ended the previous season with the record of 0.287 Batting-Average (BA), 15 Home-Runs and 58 Runs-Batted-In (RBIs) in 125 games.

When asked what advice he would give Kang, the Pirates owner replied, “Kang does not need advice from me. As the owner of the Pirates, I am just thankful that he is with us.”