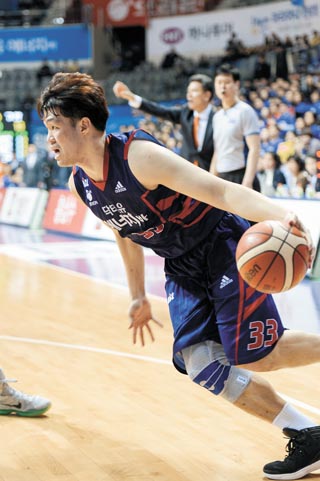 When Goyang Orion Orions star forward Lee Seung-hyun was stretchered off during the game against Wonju Dongbu Promy on Mar. 1 with a knee injury, Orions head coach Choo Il-Seung was left extremely anxious. However, after some tense moments, Lee returned to the game healthy and sound to lead the Orions to the semi-final.

Lee complained about pain on his left knee after clashing with Promy center Rod Benson in an attempt to lay in a basket in the second quarter of the match. He was taken out of the game, only to return in the third quarter and went on to contribute to the Orions’ victory and lead the team in scoring with 20 points.

“I was injured in the same spot in the past and I could not move my leg for a while after coming down from the lay up attempt,” said Lee. “But I felt better after little rest so I decided to re-join the game. I don’t feel anything’s wrong with my knee now.”

Curiously, it seems that Lee goes on to play his best after an injury. In Sep. 30, 2015, Lee rolled on his ankle while playing for the Korean national team against Iran in the quarterfinal of 2015 FIBA Asian Championship. Eight days later in the game for his home team Orions against Anyang KGC, he led the team to a 87 to 77 victory while scoring 16 points and grabbing five rebounds.

When Lee suffered from enteritis last December, he still played 34 minutes 48 seconds in the match against Busan KT Sonicboom to pile 24 points on the board, his personal best. Lee’s playing time is second in the league at 35 minutes 5 seconds on average behind leader Yang Dong-geun of the Ulsan Mobis Phoebus who averaged 36 minutes 28 seconds per match.

Owing to his effort through sickness and injuries, Lee received three titles after the regular season this year at the award ceremony including Best Defender of the Year award, Top Five Defenders of the Season award and The Most Popular Player of the Year award.

Lee’s parents are former basketball players. “It sometimes astounds me how quickly my body recovers from injuries,” said Lee. “I’m sure I got that from my parents who were also athletes. When I am out in the court and in the game, I often forget about my injuries and sickness.”

Lee was 97 kilograms when he first started to play the sport in fifth grade and managed to lose 20 kilograms in just two months. Recollecting his weight-loss efforts, Lee said, “I wore thick coats during the summer on purpose and had only two meals a day for awhile.”

Lee also tested his physical limits. “I have worked out to the point where my body started to shake,” he said. “I was in physical agony but I felt I should keep going.”

He learned stamina training more systematically in college, which may be the secret behind his quick recovery after injuries.

After Aaron Haynes was injured and out for 24 games, Lee assumed a more important role under the basket to play against big foreign players, defensively as well as offensively. However, his brilliance did not stop inside the key. During the first round of playoff against Promy, he often pulled off important field goals. In the second game of the series, Lee scored two shots beyond the arc in the fourth quarter. He also drained four three pointers in the third game of the series.

His three-point field goal percentage during the first round of the playoffs was 52.9 percent (9 out of 17 attempts).

Lee said, “I think it was a problem with confidence during the regular season that my three-point field goal percentage stayed low. I have a different mentality now that we are in the playoffs.”

Winning the series after defeating Promy in three consecutive games, the Orions had a week off to prepare themselves to play second seeded Phoebus and MVP guard Yang today.

“Although I don’t play the same position as he does, I respect Yang more than any other player in Korea,” said Lee who played alongside Yang in the national team during the 2015 FIBA Asian Championship.

“I have a long way to go to be compared with Yang. But as a team, I think the Orions have a shot at defeating Yang and Phoebus.”