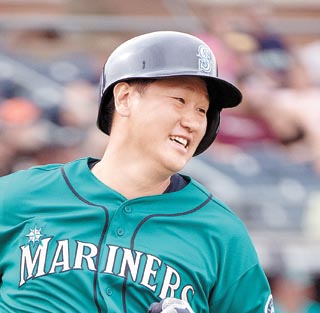 Lee platooned with Adam Lind and went into the game in the sixth inning as first baseman. His first at-bat was in the eighth inning while the Mariners were behind at 6 to 10. Lee drove the 85 miles per hour (136 kilometers per hour) fastball by Diamondbacks reliever Matt Reynolds over the left fence and recorded the solo homer for the Mariners. This is Lee’s first home run since he arrived in the United States.

Coming after the grand slam by Minnesota Twins’ Park Byung-ho the previous day, Lee’s homer is added good news for Korean baseball fans. It also excited the Mariners and their fans in the United States. The Mariners’ official website called Lee’s homer a “mammoth home run.” Mariners’ manager Scott Servais said, “That was an interesting at-bat. He fouls a ball off his knee, then hits the next pitch about 480 feet (146 meters). There’s big power in there. We know that. It was nice to see him get into one today.”

Lee got his debut hit on Sunday against the Los Angeles Angels in his first at-bat. In the game against Texas Rangers on Monday, Lee went 0-for-2 with a walk.

Lee is currently competing for a spot on the Mariners’ Big League roster as a backup first baseman and designated hitter. He played for the Fukuoka SoftBank Hawks in the Nippon Professional Baseball for the past two years before inking a split contract with the Mariners last month. He led SoftBank into two consecutive championships and won the MVP title in the Japanese League last year with 31 home runs, a 0.282 batting-average, 98 runs-batted-in and 68 runs-scored.

If Lee qualifies for the Majors roster after the spring league, he could earn up to a $4 million salary with incentives. Otherwise, he may invoke an opt-out clause in his contract to become a free agent and leave the Mariners.

Meanwhile, Texas Rangers slugger Choo Shin-soo went 2-for-2 with one run-scored yesterday in a spring league game against the San Francisco Giants.

Lee’s old friend from Busan started the game playing right field and batting second to hit the ball at his first at-bat in the first inning off pitching by Giants starting pitcher Jake Peavy. Choo scored in the third inning after his safe hit to right field in second at-bat. Choo stepped off the field in the fourth inning and was replaced by James Jones.