Strategy change a matter of necessity for Jeonbuk

Strategy change a matter of necessity for Jeonbuk 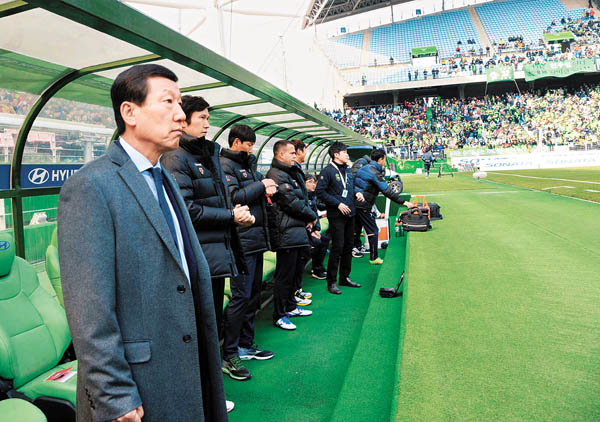 Jeonbuk Hyundai Motors manager Choi Kang-hee before the match against FC Seoul on Saturday. Jeonbuk won the match by 1-0.[NEWSIS]

At the beginning of the game on Saturday, Jeonbuk Hyundai Motors FC’s change of tactics for their game against FC Seoul had worried fans scratching their heads.

At the end of the K-League Classic opening match, however, Jeonbuk manager Choi Kang-hee was being praised for his brilliant strategy.

The 5-3-2 formation is a defensive strategy rarely seen by Jeonbuk who often assume offensive tactics. Despite the initial doubt, manager Choi’s formation was considered a great move and K-League fans went wild over Choi’s boldness, which created a 1-0 win for his team.

The formation of three central defenders in the back is a signature move of Seoul’s manager Choi Yong-soo. Jeonbuk went head-to-head with the same strategy to emerge victorious in the end. However, a closer look at Jeonbuk’s line-up showed it was not something to get too excited about. The strategy actually revealed Jeonbuk’s critical weakness: the instability and vulnerability in central defense.

Preparing for the season, Kim Kee-hee was the focal point for Jeonbuk’s defense. But Kim transferred to Shanghai Greenland Shenhua F.C. just before the season opener. The sudden departure of Kim signalled the collapse of Jeonbuk’s defensive strategy. Its vulnerability became apparent in the second round match of the tournament for the 2016 Asian Champions League against China’s Jiangsu Suning F.C. on Mar. 1. Jeonbuk lost the game 2-3.

The situation left Jeonbuk’s manager in a quandary. With the opening match against rivals Seoul quickly approaching, he decided to go with the 5-3-2 formation. The move might also have dented the manager’s ego, who has always insisted on an ‘all-out attack’ at home matches. It is his unwritten rule to provoke excitement among fans and draw larger crowds to the home games. The rule was completely shattered in the first home season game.

“I think this is the first time the manager has had three central defenders in a home game,” according to a Jeonbuk staffer. The manager could not neglect the team’s limit on defense and had to forgo his pride to bring the home fans a victory. Although the team won its first home match with a record-breaking audience of 32,659 fans, the attendance failed to put a smile on the face of the Jeonbuk manager.

“Kim Kee-hee’s absence posed serious problems for us defensively. Having three central defenders was the last resort for us to escape the crisis we have defensive-wise. Seoul’s offensive line is too loaded with Dejan Damjanovic and Carlos Adriano,” said Jeonbuk’s manager.?