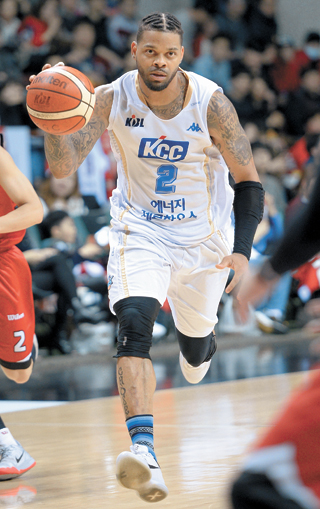 When the Korean Basketball League (KBL) championship finals kicked off on Saturday, local fans weren’t just excited to see the Jeonju KCC Egis take on the Goyang Orion Orions for the trophy.

Underneath it all, there was a much more personal fight between Andre Emmett of the Egis and Joe Jackson of the Orions, both of whom feel they’ve earned the right to call themselves the best player in the league.

Neither is mincing words.

“Joe Jackson is quick, sure,” said Emmett. “But he barely reaches to my chest.”

Jackson replied, “I acknowledge his scoring ability. But I outperform him in passing and defense.”

Before this season began, the Korea Basketball Association (KBA) altered the foreign player draft regulation to allow teams to pick two players, one below the height of 1.93 meters (6-foot-3) and one above. Because of this new rule, foreign players that are deemed short, such as Emmett, who stands at 1.91 meters, and Jackson, who stands at 1.80 meters, were able to make their appearance in the KBL for the first time. Emmett and Jackson have garnered particular attention for their ball-handling skills. 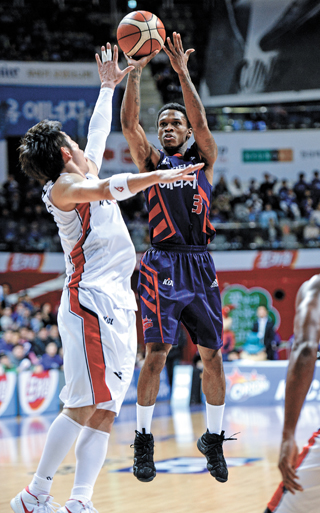 Joe Jackson of the Goyang Orion Orions takes a shot over a defender. [KBL]

Emmett played for the NCAA division one Texas Tech Red Raiders. He is still the all-time leading scorer for the Red Raiders after tallying 2256 points. Emmett played 14 NBA games for Memphis Grizzlies and New Jersey Nets. His trademark moves include fade-aways and floaters. This year, Emmett led the Egis to first place in the regular season while amassing 1389 points, the most points scored by a single player this season. In the semi-finals against Anyang KGC, Emmett averaged 33.7 points per game to lift the Egis over the KGC.


“He is truly a scoring machine,” said Kim Seung-ki, the KGC head coach. Woo Ji-won, former guard of Ulsan Mobis Phoebus and current SBS Sports Commentator, said of Emmett, “He is one of the top three foreign players in the history of KBL along with Marcus Hicks, a former Orions players, and Chris Williams, a former Phoebus player.” In March 2010 while playing for China’s Jiangsu Dragons, Emmett scored 71 points, then the Chinese league record for a single game.

Jackson also has a noteworthy career. Jackson played in the U19 World Championship for the United States in 2011. Although he is not as tall as other foreign players, Jackson’s gravity-defying dunks became his trademark this season. He made headlines on Nov. 21 when he dunked over Kim Jong-kyu of the Changwon LG Sakers, who stands a cool 2.06 meters tall.

The dunk is considered one of the highlights of this season. Jackson’s standing reach - measurement of how high someone can reach while standing - measures at 2.38 meters and he jumps over 93 centimeters (36 inches) with running start.

“I was humiliated by Jackson,” said Sakers Kim. “I was dumbfounded even after the game.”

Hyun Joo-yeop, a former basketball player who famously shattered the backboard in 1997 with a dunk, described Jackson’s dunk as “flying like a butterfly and stinging like a bee.”

Jackson led his team in the playoffs with 17.67 points and seven assists on average per game. He exploits his agility and ball handling on the court to score under the basket or with field shots.

“I used to box five times a week while I was in the United States to improve my agility and mobility,” said Jackson.

“Emmett is a difficult player to guard,” said Orions coach Choo Il-seung. “We will have to channel our effort on stopping other players because he will go on scoring no matter what.”

On the other hand, the Egis coach Choo Seung-kyun said about Jackson, “We need to throw off the Orions balance by preventing Jackson from getting to the ball.”

Emmett and Jackson led their respective teams in the first game of the KBL final series on Saturday by putting up 25 and 20 points apiece. The Egis edged the Orions by 82-76. The next game of the series is scheduled for tonight at 7 p.m. in Jeonju. The KBL finals will be played as best of seven series.