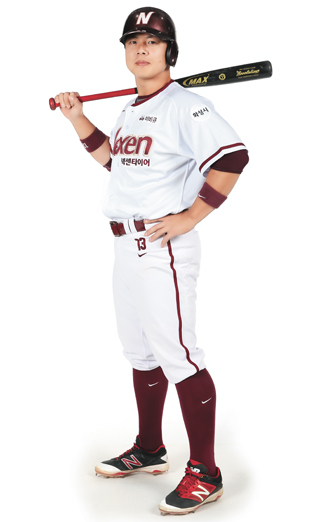 His last season was cut short because of a broken leg, and shortly thereafter, he came down with gastrointestinal tuberculosis, a relatively rare form of the infection that usually attacks the lungs. It causes dramatic weight loss, and can be fatal if left untreated.

When Yoon was spotted on Mar. 15 in the dugout during an exhibition game between the Heroes and SK Wyverns at the Gocheok Sky Dome, he looked substantially thinner than before.

“I was diagnosed with intestinal tuberculosis last year,” said Yoon when asked about his weight. “The last few months have been rough. I lost about 7 to 8 kilograms because of the condition.”

If detected early, tuberculosis is almost always curable. But once diagnosed with the disease, a patient must take antituberculosis drug which may have some side effects and the recovery can still take between six and nine months.

While waiting for his diagnosis, Yoon was haunted by the thought that he might have intestinal cancer. “I searched for intestinal cancer on the internet.” said Yoon. “Out of the ten symptoms of the disease, I had nine. The waiting really stressed me out. It was dreadful waiting for the result.”

In retrospect, nothing was given to Yoon for free while he was in the pros. Yoon made his debut in the professional baseball in 2004 for the Doosan Bears, and he moved to the Heroes in 2014. Yoon has played at third base, first base and also been a designated hitter. But in a surprise move before last season, Yoon was put in the shortstop position. It was to fill in the spot of Kang Jung-ho, who had just moved to the Pittsburgh Pirates in the Major League Baseball (MLB). Yoon trained hard to familiarize himself to the position, often literally throwing himself on the ground. When the season began, however, he played first and third base because of injuries among the Heroes infielders. Yoon also injured his leg towards the end of the season. Before his broken leg cost him the remaining season, he played in 108 games and put up a .294 batting average (BA), 106 hits, 14 home runs and 71 runs batted in (RBI).

The Heroes manager Yeom Gyeong-yeob before the season began promised Yoon he will stay fixed at first base now. “Yoon has sacrificed a lot for the team by filling in different positions whenever the team needed him to,” said the Heroes skipper Yeom. “Now it is time that we compensate him for his selflessness.”

Although Yoon is happy to have a fixed position, it comes with great responsibility and big shoes to fill ? namely the former Heroes first baseman Park Byung-ho, who left for the MLB before this season. “It seems like there is nothing easy in this world,” said Yoon. “After covering for Kang, now it is Park that I have to replace. It truly is a daunting task. Even if I put out the best performance of my career, it would still be difficult to outperform Park’s home run record. I am happy and thankful for where I am right now, but at the same time, it is overwhelming.”

Struggling with his leg injury last year and intestinal tuberculosis shortly thereafter, Yoon feels as though he has persevered through the hardship well and came out more mature than before. He also tries to look at the bright side of his situation. Yoon is hitting well in the exhibition games so far. As of today, Yoon holds a .280 BA, and seven hits in 25 at-bats.

“My swings are decent so far but I am little worried that I might be over-pacing myself,” Yoon said. “I try to think that I am doing well in spite of the weight loss. I would like to hold on to my position at first base now that I have finally gotten it back.”