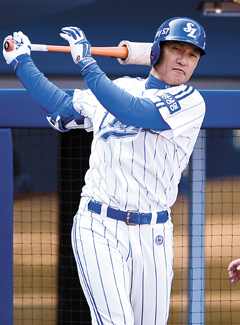 Last regular season, it felt like Korea Baseball Organization (KBO) records were being broken one after another. There was Lee Seung-yeop of the Samsung Lions recording 400 KBO career home runs, not to mention Eric Thames of the NC Dinos hitting the single season combo of 40 homers and 40 stolen bases.

This season, fans are predicting even more records will be smashed.

Expectations continue to be high for legendary Lions slugger Lee.

After breaking the home-run record last June, the “Lion King” clinched 16 more home runs for the remainder of the season.

This year, he promises even more fireworks.

“I plan to hit more than 30 home runs this season,” said Lee. He’s also knocked 159 balls out of the park while playing in Japan. Currently at 575 career homers, he is expected to surpass 600 before this season ends.

Lee also has gained an opportunity to sweep all the slugger records previously set by his old colleague Yang June-hyuk. If Lee grabs 450 home runs in the KBO, new records in career runs scored, runs batted in and hits are likely to follow.

Then there’s Park Yong-taik of the LG Twins, who has played well and reached a career milestone last year despite his team’s poor showing.

After pulling 159 hits last season, Park became the first batter in KBO history to record more than 150 hits each season for four straight years. Park is also the KBO’s most distinguished base stealer. He has raked in double digit stolen bases for 15 consecutive seasons, and fans hope he’ll continue his streak this year. 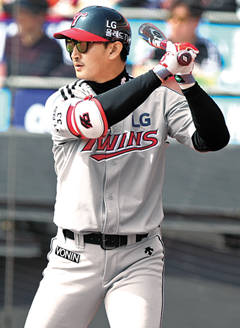 In other records, Park Han-yi of the Lions is likely to match former Lion Yang in batting over 100 hits a season for 16 straight years. KT Wiz’s Lee Dae-hyung also hopes to tally 500 career stolen bases, becoming the third player in the KBO to hold that record.

Chang will try to match 10 consecutive wins for seven straight years, a record set by current Nexen Heroes coach Lee Kang-cheol and MBC Sports commentator Jung Min-cheul in the late 1990s. As a veteran pitcher with domestic and international experience under his belt, Chang is hoping to capture the record of 100 strike outs in a single season for nine straight years.

Bae Young-soo of the Hanwha Eagles is also garnering attention. He is two wins shy from collecting a career 130 wins. Bae is also expected to throw 2000th inning of his career this season.

There are some relievers hoping to break records as well. Lotte Giants closer Son Seung-lak, for instance, will try to secure more than 20 saves a season for five years in a row. Currently, former Eagles reliever Koo Dae-sung is the only pitcher in the KBO to have recorded over 20 saves for five straight years.

The playing field is relatively level among teams in the KBO this year for various reasons, including notable free agent contracts, big-name foreign player signings and transfers made in the second round of transactions. KBO regular season will officially begin tomorrow.