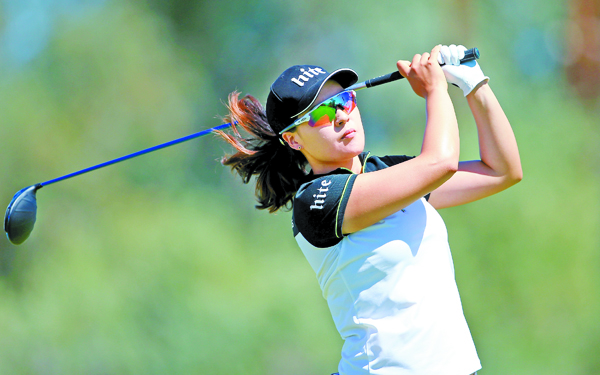 South Korean golfer Chun In-gee tees off during the ANA Inspiration. Chun is in her first official season at the LPGA and placed second in the major even. [tNEWSIS]

While Park In-bee is a veteran LPGA player, the ANA Inspiration was the first LPGA major event for Chun. It was also the first LPGA event for Park Sung-hyun who was playing in the tournament as a non-member participating via invitation. Ryu So-yeon and Lee Bo-mee also finished in the top 10 after tying at 10th with 7-under 281 finish.

Chun is coming out of the unfortunate back injury following a controversial incident in Singapore before the HSBC Women’s Champions which forced her to withdraw from the past three events. Chun injured her back in early March at the airport when the father of Jang Ha-na, another Korean golfer in the LPGA, dropped his carry-on luggage down an escalator, striking Chun and damaging a muscle in her lower back. Jang went on to win the HSBC tournament.

However, following the back injury, Chun seemed to be unfazed although she was forced to miss three events.

In the ANA Inspiration over the weekend, the South Korean rookie, who is officially on her first year in the LPGA, went 69-under par from the first to the third round, remaining in the top five throughout the whole tournament.

Finally, in the last round, Chun grabbed three birdies in the ninth, tenth and 18th holes, while bogeying the 16th hole to card 70-under. Chun aggregated 11-under 277 to tie in second with Charley Hull of England.

“I missed the course,” said Chun after the first round. “During the rehab process after my injury, I felt depressed and uninspired. It was rough. But now that I am back on the course, I started to feel the motivation again.”

When asked about her physical condition, Chun said she is almost fully recovered, but not quite. “Mark Smith, my personal trainer, has been advising me with necessary prescriptions to tune my condition. I am just glad to be back and be playing in the big event again,” said Chun.

This is the second LPGA major event where Chun put in such an exceptional performance. The former Korean LPGA champion who reigned over five events last year, grabbed a victory in the U.S. Women’s Open in July when she joined the tour with an invitation as a non-member.

Park Sung-hyun also seemed to have made her mark on the U.S. stage over the weekend as she finished sixth, along with her compatriot Park In-bee, U.S. golfer Gerina Piller and German golfer Caroline Masson.

Park Sung-hyun scored an impressive 67-under in the second round. But, in the final round - although she nabbed four birdies on the seventh, ninth, 16th and 18th holes - her early bogeys, including the two in the first and second holes, stymied her from advancing in the rankings. She finished the round 71-under to compile 8-under 280.

New Zealand’s Lydia Ko, who is ranked first in the world, grabbed her second major championship title and second season win over the weekend with 12-under 276 finish. Ko had three birdies in the final round to snatch 69-under.

The next LPGA tournament is the LOTTE Championship at Ko Olina Golf Club in Hawaii from April 15 to April 18. The defending champ Kim Sei-young, who has one win this season under her belt, will attempt to grab another success in Hawaii.