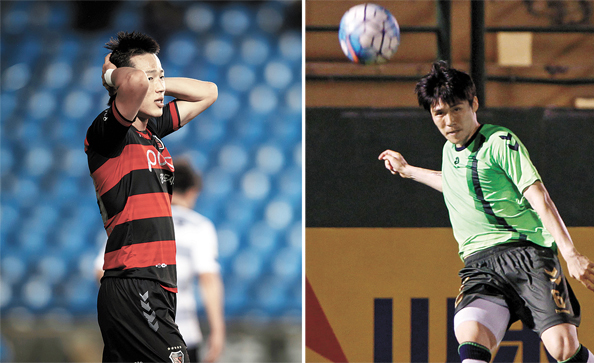 Pohang Steelers midfielder Son Jun-ho, left, is out for the season due to a knee injury, while Jeonbuk fullback Kim Chang-soo, right, is in a predicament because of red cards. [K-LEAGUE, YANG GWANG-SAM]

The Pohang Steelers and Jeonbuk Hyundai Motors should not be struggling so early in the season. Pohang is the K-League’s traditional football powerhouse, and Jeonbuk readied itself over the winter transfer window and bolstered its roster with big-name players from the K-League and around the world.

But both Pohang and Jeonbuk have simply been unable to get their heads on straight from early on, and the situation seems to have gotten worse for both teams as the season unfolds.

Jeonbuk was favored to top its group in the Asian Champions League (ACL) and advance to the next round as the first seed. But after a disappointing 3-2 loss to Vietnam’s Becamex Binh Duong on April 6, the team is ranked second in Group E, behind FC Tokyo, with two wins and two losses.

The situation is more alarming for Pohang. After clinching its only win in the ACL group stage during the second round in a match against the Urawa Red Diamonds of Japan, Pohang lost two straight games in the third and fourth rounds to Sydney FC on March 16 and April 5. Ranking third in the group with only two games remaining, the team’s chances of making the ACL round of 16 seem bleak at best.

Things are not so different in the K-League Classic for the two clubs. Although Jeonbuk is ranked third in the standings, its performance on the pitch is comparatively worse than expected, scoring a mere five goals in five games despite its offensive lineup being stacked with players such as Lee Dong-gook and new additions like Lee Jong-ho. Even worse, the Steelers have only pulled out one win out of the five games it has played so far this season, putting the team at seventh place in the current standings.

Adding to the adversity, the two clashed in the fourth round of league play last weekend, and both teams only gained more problems. After tying 1-1, Pohang went home with an injury while Jeonbuk left with a red card.

For Pohang, Son Jun-ho’s injury from Sunday leaves a big hole in the middle. Three minutes into the match against Jeonbuk, Son collided into Jeonbuk’s goalie, Kwoun Sun-tae, while attempting to take a shot and had to leave the pitch early. Son was moved to a local hospital, where the initial MRI scan suggested Son had damaged a knee ligament and would only need about six weeks of recovery. However, after receiving another check-up on April 11, Son’s doctor diagnosed the midfielder with a ruptured cruciate ligament in his right knee and would need at least six month of rehab, putting an end to his season for good.

For Pohang, which greatly depends on Son’s performance on the field, losing him at such an early stage in the season is horrific news. To make matters worse, Oh Chang-hyeon and Jo Soo-chul are also expected to be out until mid-May due to injuries.

If it is injuries that plague Pohang, for Jeonbuk, it is red cards. Jeonbuk players have been kicked out of the match in two consecutive games. Fullback Kim Chang-soo and Kim Hyung-il were called out during the ACL game against Binh Duong on April 6, costing Jeonbuk the game. Then four days later, in their K-League Classic match against Pohang, Jeonbuk’s Kim Chang-soo was again given a red card and sent off the pitch. While the team was ahead 1-0, Kim’s sudden disappearance created a huge hole in its defense and changed the tempo of the match entirely. Eventually, Jeonbuk conceded a goal to Pohang’s Shim Dong-woon in the 89th minute.

But the bad news does not stop there for Jeonbuk. With a red card in his belt, Kim Chang-soo cannot make an appearance in the next two K-League matches, not to mention that he will also be absent from the next ACL game. This completely throws off Jeonbuk’s game tactic for April.

“What’s worse than the draw is that Kim Chang-soo will have to miss the upcoming games,” Jeonbuk manager Choi Kang-Hee said. “We have eight games in April, and with Kim gone, the defensive lineup will have to bear the added pressure.”

Pohang and Jeonbuk yet again had disappointing games in the fifth round. While the Pohang team tied with the Suwon Samsung Bluewings 1-1, Jeonbuk also had the same result with bottom-ranked Incheon United FC. Pohang will take on Sangju Sangmu FC and Jeonbuk will play Seongnam FC this Saturday.