Legend is confident U-23s will shine in Rio

Legend is confident U-23s will shine in Rio 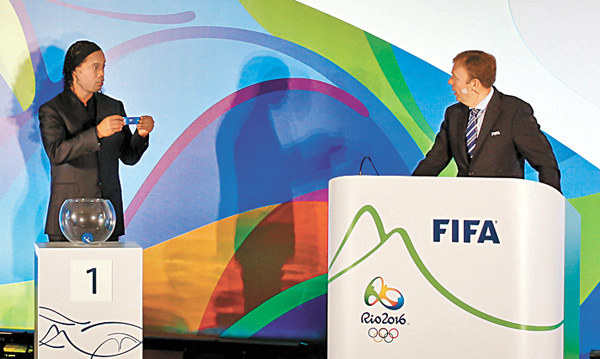 Brazilian footballer Ronaldinho, left, participate in the draw of the Rio 2016 Olympics football tournament. Korea was assigned to Group C along with Mexico, Germany and Fiji. [XINHUA/NEWSIS]

FC Seoul’s Park Chu-young is a legend when it comes to South Korean football in the Olympics and he is sure that this year’s squad is good enough to excel at the Games in Rio.

“They shouldn’t back down against the football powers from around the world,” said Park. “It is inevitable that they will meet teams strategically more skilled than South Korea in such a big stage. They just have to accept it and play their best. If they go into those games determined to run more and play harder, then they will come out with a satisfactory outcome.”

During the third place play-off against Japan in 2012 London Olympics, Park penetrated Japan’s side of the pitch on a fast break and shook off four defenders to score the opening goal for South Korea in the 38th minute.

After Koo Ja-cheol, who currently plays for the Augsburg FC in Bundesliga, added another goal, South Korea crushed its archrival Japan 2-0 to earn an Olympic bronze. This was the first Olympics medal for South Korea in the summer games in football. With his astonishing 50-foot shot, Park made his mark in the history of South Korean football.

While his memorable performance was four years ago, the South Korean U-23 national team is again getting ready for the summer games, hoping to repeat, or even surpass, the last Olympics.

However, the journey will be difficult, even from the preliminary stage. During the Olympics Football Tournament draw that took place last Thursday at Maracana Stadium in Rio de Janeiro, Brazil, South Korea was assigned to Group C along with Mexico, Germany and Fiji.

Mexico took the football gold medal in the last Olympics and the squad is favorite to lift the gold again this year. Germany, which is making its first appearance in the Olympics in 28 years, is a renowned football power and is fielding a team that is as lethal as the squad that won the 2014 World Cup.

While South Korea finds itself in one of the most difficult groups, its task is not impossible.

Making its appearance for eight straight years in the summer games, the South Korean squad is stacked with names such as Ryu Seung-woo of Bayer 04 Leverkusen and Kim Hyun of Jeju United FC, as well as Premier League Tottenham Hotspurs’ midfielder Son Heung-min as a wild card.

Considering the quality of players who will be travelling to Rio, Park believes the national team has a good chance of progressing.

“I am certain that Son has learned a lot playing alongside older players in the national team,” said Park, showing his confidence in Son. “I am sure Son knows his role as the wild card for the team.”

Park himself was a wild card during the 2012 London Olympics and as one of the older players he assumed a leadership role to lead the U-23 team to success. He is hoping Son will assume the same role in Rio.

“The Olympics was a dream for me. Qualifying even for the preliminary stage was my ambition. I am sure this is the same for other athletes as well. Now that they have the chance to play in the dream stage, the U-23 team should focus and take up the challenge,” Park said.

“I am always interested in what’s happening with the Olympics team but with my teammates in the roster, I am more interested in the team’s success than ever. I hope the team reaps outstanding results at the Rio Olympics.”