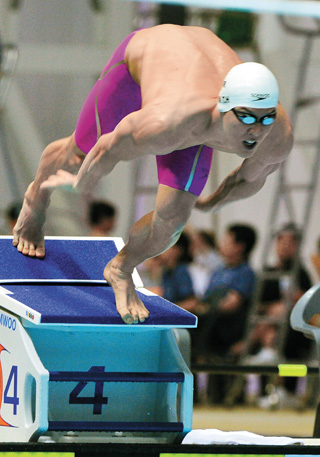 The controversy over whether Korean swimmer Park Tae-hwan should be allowed to compete in the Rio Olympics this summer heightened after he dominated a local swim meet.

At the 88th Dong-A Swimming Competition at Nambu University International Aquatics Center in Gwangju, the 27-year-old seemed unfazed by the doping scandal that shocked the sports world and led to his 18-month exile from the sport and his elimination from the Games in Rio. The competition serves as the second round of qualifiers for the national team to compete in Brazil.

Park is just returning from his 18-month suspension by the International Swimming Federation (FINA) for testing positive for testosterone in an out-of-competition test in September 2014. Although the FINA suspension has expired, Park has been ruled out of the Olympics by a Korean Sport Olympic Committee (KSOC) decision which stipulates that an athlete suspended for a doping offense cannot be listed on the national team roster for a period of three years after the ban expires.

In the first day of the competition at Gwangju on Monday, Park dominated the freestyle 1500-meter race with a time of 15 minutes and 10.95 seconds, falling within the top Olympic qualifying standards set by the FINA which is 15:14.77.

Although this is short of his personal best at 14:47.38, given that it was his first official meet in almost two years and that 1500-meter is not the regular event that Park normally competes in, the time astonished fans. His time also sets a record in the Dong-A Swimming Competition.

On Tuesday, Park again grabbed first position in the 200-meter freestyle with a time of 1:46.31. Even though Tuesday’s time was not enough to top his personal best of 1:44.80 set at the 2010 Guangzhou Asian Games, it is the seventh best time this season in the world. The record this year was set by Britain’s James Guy who timed 1:45.19 on April 17. Park’s time also meets FINA’s qualifying standards.

On Wednesday, the last day of the competition, Park clocked 3:44.26 in the 400-meter freestyle to overwhelm his competitors once again in the arena. His time ranks Park fourth in the world in the men’s 400-meter freestyle after Mack Horton of Australia with 3:41.65, Guy with 3:43.84 and Gabriele Detti of Italy with 3:43.97.

When asked whether he was satisfied with his time performance, Park said, “I think many people might think my time was worse than expected. I think I was a little worn out from the 1500-meter event on the first day. After participating in the long distance event, I had some trouble tuning myself into short distance events. Also I had to step out of the arena to change my swimming suit after it was ripped right before the event started. But everything aside, I thought it was my responsibility to show everyone that I was doing everything I can after all the commotion in the past two years.”

Some argue that the KSOC regulation that rules Park out of Rio imposes double punishment on athletes and should be eliminated.

One of the officials at the Gwangju swim meet, who also serves as a coach of a team, said about Park, “An athlete who has been punished by the international body already should not be punished again. We can put him under a more restrictive doping test as a preventive measure and this should be enough.”

Another coach said, “Park is a rare talent. No one in Korea at the moment can outpace him. Punishing him further is a loss for Korean swimming.”

Some people suggested Park should be allowed to participate in Brazil to give him a chance to prove that what he did in the past was not aided by banned drugs.

However, others argue that since some athletes in the past have served their punishment under the KSOC rule, it would be unfair to change the regulation.

A parent of one of the swimmers at the meet said about the issue, “We are all aware what a great swimmer Park is. However, there are many athletes who have had to call it quits after a doping scandal. It would not be fair to allow Park to represent our country while many others simply left the sports world because of what they did. If the KSOC and related sports governing bodies are to change rules just for Park, then they should also be held responsible for what happened with other athletes as well.”

Some felt that if the rules were changed it would increase drug abuse cases. One of the swimmers in the event said, “Doping is a moral issue for athletes. Some say the regulation is a double punishment but others are abiding by the regulation. Why should Park be singled out?”

Others pointed out that some athletes are very cautious about even taking simple anti-inflammatory medication and Park, who has a team behind him as a national celebrity in swimming, should have been more careful.

Some fans and sport insiders believe that although Park did wrong, he should be given a second chance as he made Korea a strong contender in swimming. Before Park, Korea has never had an athlete who placed top in the world.

Regarding his current status, Park simply said, “I am not in a position of saying anything definitive at the moment. However, if I am given a chance to compete in the Olympics, I am confident I can do well. I am not talking about medals but more about my personal struggle to overcome my past performances. I hope fans will continue to show me support.”

He said his participation in the Dong-A Swimming Competition wasn’t just to prove he is capable of competing in the Olympics. “I trained hard in Australia for the past month,” he said. “I had a lot of people at my side helping me. The only way for me to repay their support was to not let their efforts be in vain.”