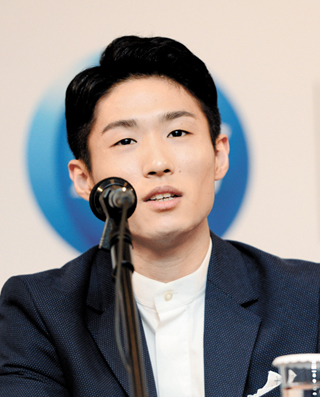 Korean gymnast Yang Hak-seon discusses his current condition at the opening ceremony for the “Thank You Mom” campaign on Tuesday. [NEWSIS]

The odds are stacked against him, but Olympics gold medalist Yang Hak-seon won’t let go of his hope to earn a second gold in the vault event at the upcoming summer games in Rio.

Yang, who is the first Korean to win an Olympics gold in gymnastics, ruptured his Achilles tendon in March while training for the first round of the national team selection tournament that was slated for April 2.

After the accident, Yang immediately underwent surgery to repair the damage.

Many experts, including his coach and physicians, said it is highly unlikely that Yang will be fit to participate in the upcoming Olympics.

But the athlete was spotted at the opening ceremony for the “Thank You Mom” campaign hosted by P&G Korea and the Korean Sport Olympics Committee (KSOC) on Tuesday in Seoul, and he sounded determined to still make it.

“Thank You Mom” is an initiative that was started during the Sochi Olympics by P&G and KSOC to recognize the roles mothers play in the success of their kids, and to sponsor and support Olympics athletes and their mothers in their journey to the summer games.

“I am still in the process of rehab so I cannot give a definitive answer yet,” said Yang during the event when asked about the plausibility of him being added to the Olympics roster. “The roster will be listed after the final round of the national team selection tournament trials slated for May 20. At the moment, my physicians are telling me that it is too soon to try my luck with my foot and that I need to be more cautious.”

“I am heartbroken about my son’s injury,” said Yang’s mother, Ki Sook-hyang, who was also present at the event. “I just hope he endures through all this.”

When asked about his mother’s role in his success, Yang said, “My mother has always been someone I could count on whenever I needed. She is my biggest supporter. An athlete doesn’t succeed because of his own efforts, but rather because of the support and love of his parents.”

Although Yang, as the reigning champion from London in vault, might seem to be without much incentive to try his luck at the next Olympics, he begs to differ.

“I cannot show the full extent of my abilities in just one event,” said Yang. “I have caused concern for my trainers and coaches and I am sincerely sorry. But everyone’s support is the drive behind my willingness to push forward and not let go of my hope to compete.”

“Physically, I am getting better,” Yang added. “I am just going through some recovery exercises at the rehabilitation center or hospitals these days. I still do some weight training to remain in shape, but I cannot do any difficult training involving jumping and landing yet. Even walking is a little difficult for me at the moment. But it has been six weeks since my surgery. Doctors told me the first six weeks after the surgery is the time during which the ruptured tendon could be damaged again. In terms of the possibility of participating in the Olympics this summer, I honestly think it’s going to be tough.”

“But an athlete’s job is to make miracles happen when all seems to be lost,” he said. “I will not abandon hope. But for the final round of national team selection event on May 20, I probably will not be able to participate.”