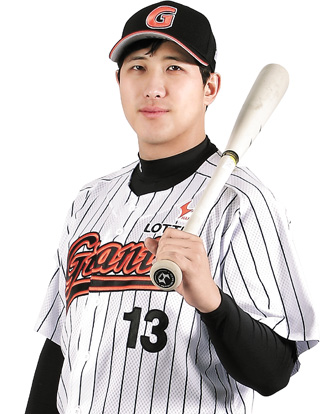 A broken toe has put an end to Lotte Giants infielder Hwang Jae-gyun’s bid to break the record for the most consecutive games played after five long years.

However, Hwang claims indifference, saying he had already let go of his obsession with the record before the season began and that he’s prepared to sacrifice whatever is necessary for the success of his team.

Hwang didn’t miss a single Korea Baseball Organization (KBO) season game from July 8, 2011 against the SK Wyverns until April 29, 2016 against the NC Dinos.

This allowed Hwang to top the number of consecutive games played by a current KBO player, which previously belonged to KIA Tigers infielder Lee Bum-ho with 615 games.

Hwang’s intense self-discipline has been the bedrock for his record, and has also given him the nickname “Iron Man” in the league.

After his last game April 29, he’s ranked third in terms of the overall number of games played in a row.

Current LG Twins coach Choi Tae-won tops the standings with 1,014 games followed by Kim Hyeong-seok, who played for the predecessor of Doosan Bears, the OB Bears, from 1985 to 1998, and recorded 622 games.

In the game on April 29, Hwang fractured his left toe during his third at-bat of the day in the bottom of the sixth inning. Hwang’s doctor decided he needed 10 days of rest. He was excluded from the roster and moved to the disabled list on April 30 against the Dinos.

Hwang was just only four games shy of matching the record for the second-highest number of consecutive games played in KBO history.

The first day after he was sidelined on April 30, Hwang watched the Giants game on television, something he was very unaccustomed to.

“I couldn’t get used to it,” said Hwang after the game. He declined to comment when asked about the team’s performance in the game, during which the Giants lost to the Dinos 1-8.

But he was rather nonchalant about his absence. When asked whether he was disappointed that his run came to an end, Hwang said, “I am totally fine. I am indifferent about it.”

He seemed to be neither relieved nor disappointed by being unburdened of the pressure to set a new record. The only thing on Hwang’s mind was healing his toe.

Hwang hasn’t always been aloof about his record. During the same time last year, he said, “A starter of a team must play the full season. If possible, I would like to continue with the run.”

He added that he never considered himself to be exceptionally talented, but that he simply wanted to show fans that if you’re mentally and physically strong, you can do anything you set your mind to.

But Hwang’s mindset changed drastically before this season.

“When injured, the priority is recovery and nothing else,” he said. “I could hurt the team. I need to be recognized not by my personal record but rather by my performance on the field.”

He seemed to have learned his lesson after last season, when he pulled his hamstring but powered through without missing a game. That decision hampered his recovery time and took a big toll on his performance by the last game.

Hwang could have stayed on the roster and continued with his run after his most recent injury, but opted for a different approach.

“Manager Cho Won-woo proposed that we do not elongate the recovery period from ten days to a month and I agreed,” added Hwang. “I think I will take this opportunity to concentrate on recuperation.”

The only thing the player seems to truly regret about his vacancy is that it puts a damper on his hot hitting streak.

During the April 28 game against the KT Wiz, Hwang smashed two home runs - the first time he’s had multiple homers in a single game. In fact, in the last ten games he’s played, he’s had at least one hit per game, excluding the one on April 29 when he was injured.

“Just when I thought I was beginning to find my pace on the plate,” said Hwang, who has spent much of the season so far fiddling with his batting form.

Still, the player is focused on staying upbeat and using the time off productively.

“I will try to see things that I have missed, Hwang said. “I am positive that once I am back in the field, I will be able to regain my momentum quickly.”

The Giants struggled with Hwang on the disabled list. Since Hwang’s injury on 29, the Giants went on six-game skid from April 29 to May 5 until the team finally escaped from the streak on May 6.

But Hwang’s return is imminent, thanks to his willingness to step off the field to concentrate on rehab and not aching over the record.

The fracture on his toe has almost healed, according to his checkup on May 6 and he is expected to start light workout sometime in the upcoming week.