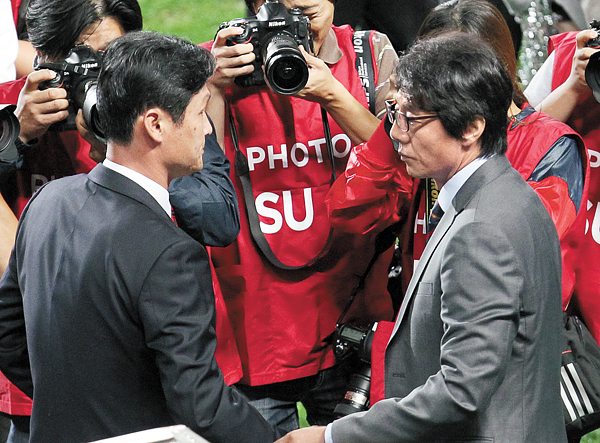 Choi Yong-soo, left, has left K-League’s FC Seoul to take the helm at China’s Jiangsu Suning FC. Hwang Sun-hong, right, is to succeed him as the skipper for Seoul. Choi’s decision to leave midseason has drawn scrutiny from Korean football fans who are divided over whether his choice should be criticized or commended. [JOONGANG PHOTO]

Wednesday was Choi Yong-soo’s last day with FC Seoul as he will depart Korea to assume the top managing post at Jiangsu Suning F.C. in the Chinese Super League, the country’s top tier-league in professional football. Hwang Sun-hong, one of the most celebrated football figures in Korea who guided the Pohang Steelers to the FA Cup championship in 2012, has succeeded Choi as the skipper of FC Seoul.

Choi, who began his professional career in 1994 with the LG Cheetahs, predecessor of FC Seoul, has dedicated most of his football career to the Seoul-based team. Aside from the short period spent in the military and the Japanese league, he spent the majority of his senior career as a player for FC Seoul.

Since his managerial career began in 2006 after his retirement, Choi has been with the club, as a coach, as a caretaker and finally as the manager. No one could have pictured Choi heading a team other than FC Seoul.

Obviously, things have changed. Jiangsu Suning, which sacked its manager Dan Petrescu this month, has been trying to bring on Choi as the team’s full boss for a while and it has finally succeeded.

“Jiangsu Suning, which has appraised Choi’s managerial ability highly, has been courting Choi for awhile,” FC Seoul said in a statement. “Choi has decided to take on this challenge at a new and bigger stage. The club has decided to respect Choi’s decision.”

Jiangsu Sainty, the predecessor of the current Jiangsu Suning, sent initial offer worth 5 billion won ($4.3 million) last July to place Choi in its top managerial position for two and half years. Choi initially was swayed by the lucrative offer but eventually chose to stay on with his team, citing loyalty. “I could not leave Seoul behind out of the guilt I would feel towards the players I picked as well as out of the gratitude for the club,” said Choi after rejecting the proposal by the Chinese team. “I felt I had to be loyal to the club, the players and the fans.”

But, in less than a year, there was a dramatic about-face.

Suning finally convinced Choi to take the helm of the club. The Chinese team has been in a spending spree in the past year, breaking Chinese transfer record fees by inking a four-year contract for a transfer fee of $56 million with Brazilian footballer Alex Teixeira.

Suning outspent English football club Liverpool by $16 million to bring in Teixeira from Shakhtar Donetsk of the Ukrainian Premier League. The differential amount is more than the average of the annual budget for K-League clubs, which is about $12 million.

Although the terms of the deal that Choi made with Suning are unclear, Suning FC’s latest big spending demonstrates an attempt to become a football powerhouse.

Sentiment in Korea is divided on Choi’s sudden departure. While some condemn Choi for abandoning his team in the middle of a season, others applaud his willingness to take on a new challenge.

FC Seoul is in the quarterfinals of the Asian Champions League and is ranked second in the K-League standing. Choi has heralded the team’s current success and fans expected him to continue at the helm. Along with the two events, Seoul also is playing in the Korean FA Cup at the moment, hoping to defend its title from last year.

With everything going on with FC Seoul, Choi’s move to join the Chinese club is untimely. Unless a manager is sacked, leaving a team in the middle of a season is rare in football, or any other sport for that matter. It is an unspoken duty for a manager to wrap up a season even if he has received a generous offer. In the eyes of the some of the K-League fans and other footballers, Choi’s sudden departure is seen as an abandonment of his duty and against the norm in the sports world.

His withdrawal also could have a negative impact on the team’s morale. Even though Hwang is seen as more than fit for the job, it will take time for him to adjust to the team and vice versa.

However, some praise Choi for making such an audacious decision.

According to a staff member from FC Seoul, Choi’s decision was driven by his passion to manage global football stars such as Teixeira and he made that clear before making a decision. A stage with unlimited potential to coach high-class players with a lucrative salary is enticing for any managers around the world. For this, some argue that his choice is commendable.

Hwang, the footballer who led Korea during its run to the semifinals in the 2002 World Cup after scoring the opening goal against Poland to give the team its first world cup victory, is to take the helm starting with FC Seoul’s game on June 25.