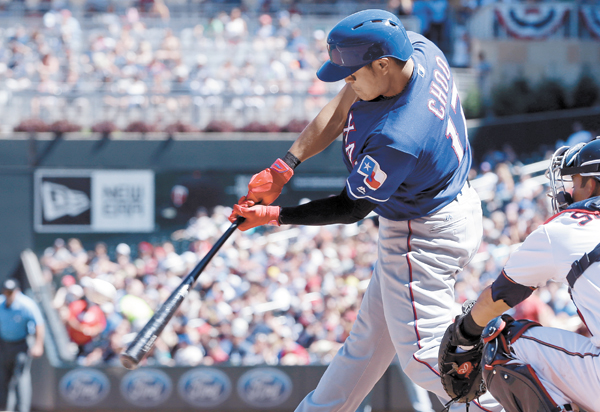 Texas Rangers’ Choo Shin-soo hits a two-RBI double during the Rangers’ game against the Minnesota Twins on Monday. Choo also hit a lead-off homer for the Rangers in the first inning. Monday’s home run was Choo’s sixth this season, but despite his output, the Rangers fell 5-4 to the Twins. [AP/NEWSIS]

Choo Shin-soo of the Texas Rangers homered for the second consecutive game on Monday Korean time, signaling his return from an injury-plagued first half of the season.

Choo smacked the second pitch of the game from the Minneapolis Twins’ starter Kyle Gibson to the left-center seats and added a RBI double to left in the top of the seventh. His heroics came up short, however, as the Rangers fell to the Twins 5-4.

The Rangers’ right fielder went two for five for the game, with three RBIs and one run scored. He raised his batting average to .263, still below the .276 he averaged last year with the Rangers. His injuries earlier this year also are reflected in his home-run production; after hitting 22 last year, he has hit only six this year, including three in his last four games.

The Rangers maintained their lead until the third inning, when the Rangers’ ace Cole Hamel ran into trouble, allowing three singles and a triple. By the time the Twins’ seventh batter of the inning, Max Kepler, lined out to Choo, three Twins had crossed the plate and the Rangers were down by two runs. Monday’s game was the worst outing for Hamel this season; he yielded five earned runs in only four-plus innings. The 32-year-old southpaw had notched four wins with no losses during six outings in June, and had a 1.51 earned run average that month. Leaving the mound in the fifth, Hamel left his team down 5-2 and eventually registered his first loss in nearly two months. 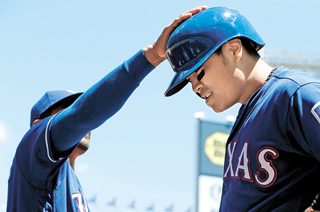 Choo Shin-soo of the Texas Rangers is greeted by a teammate in the dugout after hitting a solo home run on Monday. [AP/NEWSIS]

Choo got back part of that deficit when he doubled with a line drive to left field in the top of seventh. That drove in Elvis Andrus and Jurickson Profar to make the score 5-4, the game’s final score.

Elsewhere in the majors, the St. Louis Cardinals’ “The Final Boss’” Oh Seung-hwan notched his second save in the U.S. majors on Monday as the Cardinals edged the Milwaukee Brewers 9-8. Oh drew the closer assignment for the Redbirds for a second consecutive day after being promoted from his earlier setup reliever role. The Cardinals’ long-time closer, Trevor Rosenthal, hit a bad patch last week and was removed at least temporarily. That opened the door for Oh, who had a sparkling career as a closer in the Korean and Japanese leagues. He has now added two MLB saves to add to his 357 in Korea and Japan.

Baltimore Orioles’ left fielder Kim Hyun-soo sparkled as well on Monday against the Seattle Mariners, going 2-for-5 including a double in the top of the first inning. But the Orioles lost to the Mariners 9-4.