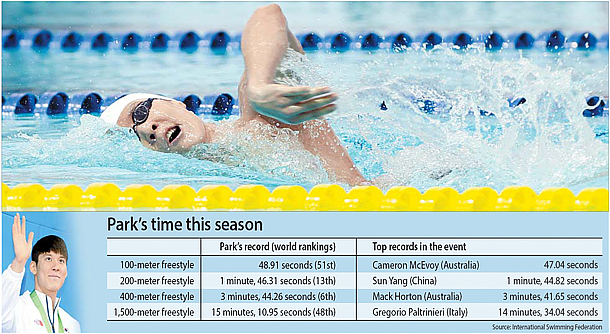 Korean swimmer Park Tae-hwan finally has a second chance to redeem his past transgressions at the Olympics. But there are questions about if Park will be ready to compete against the world’s top swimmers and emerge with a medal this summer in Rio de Janeiro.

The Court of Arbitration for Sports (CAS) ruled last Friday that Park should be allowed to compete in Rio. The Korean Olympic Committee (KOC) followed the top sports tribunal’s recommendation and placed Park on the preliminary roster for the Summer Games that was submitted to International Swimming Federation (FINA) that same day. The preliminary roster is expected to mirror the final roster.

Park, who was suspended by FINA after he tested positive for taking Nebido, a relatively new anabolic steroid, served an 18-month ban by the world swimming body until March this year. But a subsequent three-year ban by the KOC wasn’t to expire until 2019, which forced Park to appeal to the CAS.

Park’s participation in the Olympics is good news for Korea. With Park in the pool, Korea has a better chance at an additional medal this summer as it aims to finish in the top 10 in medal standings for four straight Games.

Notwithstanding, the road to Rio for the Korean swimmer has been, and will be, a bumpy ride.

Mired in controversies in the past few months, Park is physically and mentally drained, not to mention all the time he’s spent in legal battles and public appeals, which otherwise could have been spent productively in training for the Games.

Park met the “A” standards for Olympics qualification set by FINA during the Donga swimming championship in April, which doubled as an Olympics qualifier. His time in his main event, the 400-meter freestyle, was 3 minutes and 44.26 seconds, ranking him sixth worldwide in the category this year.

His latest time in the event came two weeks ago in Australia. Park competed in the Swimming Australia Grand Prix in Brisbane at the end of June, his first international meet since his ban by FINA was lifted. Park clocked 3:49.18 seconds in the event and finished third at the competition, a time that is well below the top 40 this season.

His time from the past two events is alarming. Even his best time this season is about one second behind his rival from China, Sun Yang, the defending champion who grabbed gold in the 2012 London Olympics by defeating Park. The Chinese swimmer is currently ranked second in the event this season with 3:43.55. At this current pace, it is questionable whether Park will be able to overcome his Chinese counterpart in the upcoming Games.

On top of everything, Park has not had much proper training to speak of recently. His FINA suspension, which prevented him from having any organized training sessions in the Olympic standard pool, was lifted only in March. Since then, he’s been battling the KOC to grab a spot on the national team roster. But what’s more concerning is his mental state. An extended dispute against the committee has left Park scarred and mentally exhausted.

“What worries me is the psychological factor [of Park],” said Roh Min-Sang, Park’s old coach. “He’s gone through a lot but must let go of all the anxiety. Of course, it is not as easy as it sounds. He needs to regain his mental stability as soon as possible.

“What pressures him more is all the expectations that come his way to win an Olympic medal,” Roh added.

After Park’s participation was decided, his father Park In-ho expressed his weariness. “We have taken a long detour. I have mixed feelings, rather than feeling happy.”

Park will return to Korea on July 14 before traveling to the United States in mid-July to undergo final preparation for the Games. In Rio, he will participate in all four events in freestyle, the 100-meter, 200-meter, 400-meter and 1500-meter, a sign that he will pour everything into what is likely to be the final Olympics of his career.