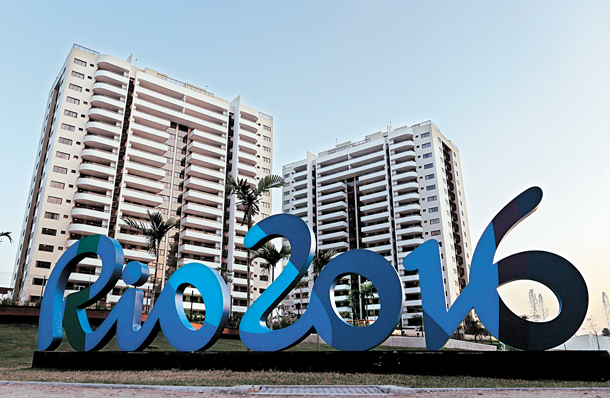 The Olympic Village is ready to host the athletes and coaches for the Summer Games that start next week. [AP/NEWSIS]

RIO DE JANEIRO - Ready or not, the Rio Olympics are opening their doors.

The Games begin in just over two weeks, but the athletes’ village opens officially on Monday, meaning 10,500 athletes and another 7,000 staff members will start trickling into the luxurious layout, with the pace picking up daily until the Aug. 6 opening ceremony at the Maracana Stadium.

The 31-building compound should pamper the world’s best. It’s set among tennis courts, soccer fields, seven swimming pools and topped off by a massive dining-kitchen compound that’s as large as three football fields.

“I want to help all the athletes have a wonderful welcome to Brazil,” said Priscilla Antonello, a residence center deputy manager whose job is to help athletes find their accommodations.

Will she be star-struck by so many Olympians?

“I couldn’t be in this job if I behaved like that,” she replied Saturday, standing on the 13th floor of one of buildings, gazing out over cycling paths, bubbling fountains and lots of green. She already knows which countries will be where, but she’s not allowed to say.

Some delegations had already arrived on Sunday, easy to spot with banners or flags hanging off the sides of buildings. Slovenia had the best banner. In green and white it says: “I Feel sLOVEenia.” The LOVE portion was set off in white type, making sure the message got across.

Everything about the village is massive, though fairly standard for recent Summer Olympics. Organizers say the compound has 10,160 rooms; 18,000 beds; seven laundries; and an enormous, hospital-like clinic.

In addition, organizers are providing 450,000 condoms, three times more than London did four years ago. Among them will be 100,000 female condoms. Organizers said this is to encourage safe sex. Many had considered that increased supply to be due to Brazil’s outbreak of the Zika virus, which has been linked to birth defects.

Asked about it on Sunday, deputy chief medical officer Marcelo Patricio replied: “No, it’s not.”

Then there’s the dining-kitchen area, a sprawling tent where officials expect to serve about 60,000 meals daily to Olympians and staff.

“The hardest part is knowing how much to prepare,” said Flavia Albuquerque, who oversees Rio’s food and beverage service. “We want them to eat anything they want to.”

There will be lots of dirty plates, but none to wash. The plates will be biodegradable, made of corn and sugar cane.