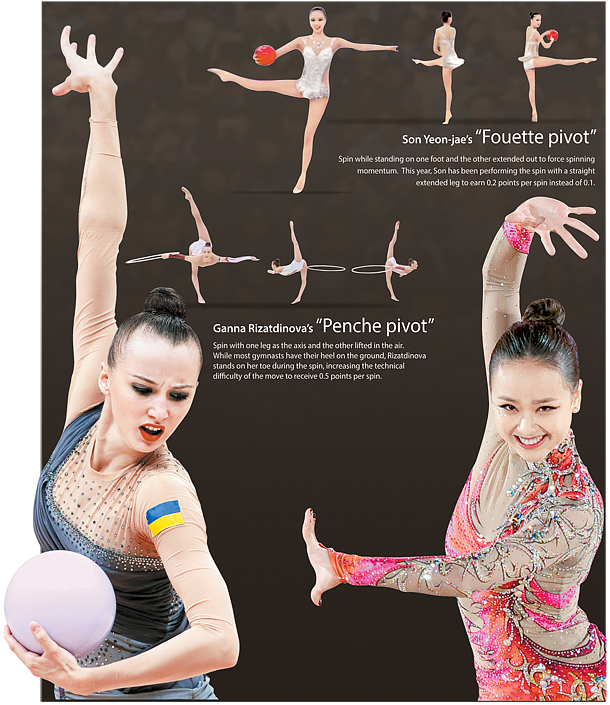 Before Korean rhythmic gymnast Son Yeon-jae came along, few in the country cared to watch the event. Some didn’t even know what the sport was.

But after the 22-year-old gymnast came close to winning bronze in the 2012 London Games, all eyes are now on the nation’s sole representative in rhythmic gymnastics. And she has her work cut out for her, as two of the top performers in the world come from the athletic powerhouse of Russia.

Even as doping allegations have disqualified over 100 athletes of the Russian team from competing in the Rio Olympics, the country’s rhythmic gymnasts, some of the best in the world, are attending the Summer Games, unaffected by the ban.

At the moment, the top three gymnasts in the world are all Russian: Margarita Mamun (No. 1), Yana Kudryavtseva (No. 2) and Aleksandra Soldatova (No. 3). Because the International Olympic Committee allows up to two gymnasts per country to participate in the Games, only Mamum and Kudryavtseva will be going to Brazil next month.

After the three Russians, Ukraine’s Ganna Rizatdinova is ranked No. 4 and Son is ranked No. 5, according to the International Federation of Gymnastics (FIG).

Given the overwhelming dominance of Mamun and Kudryavtseva in the world of rhythmic gymnastics, Son will have to set her eyes on bronze.

In the 2012 Summer Games in London, Son made history by finishing fifth, the first Korean ever to advance to the final round of the rhythmic gymnastics event in the Olympics. Ukrainian Rizatdinova finished 10th.

Since then, the two young gymnasts have become archrivals, often vying for the third spot on the podium in various events. In most of the FIG competitions this year, it was the 23-year-old Ukrainian who finished third or fourth after the two Russians. Son often finished fourth or fifth.

The only event in which Son edged Rizatdinova this year was the Rhythmic Gymnastics World Cup in Espoo, Finland, in February. Son’s personal best, 74.900 from the FIG World Cup in Kazan, Russia, still falls 0.25 points short of Rizatdinova’s personal record, which stands at 75.150.

Many insiders call Rizatdinova a perfectionist. Kim Ji-young, head of the technical committee for the Korea Gymnastics Association, said, “The biggest mistake that Rizatdinova made this year was in ball during the FIG World Cup in Berlin. She received 16.650 in the category. But she rarely makes such a mistake.”

Rizatdinova’s forte is in spin moves, and it is the same for Son. After training her core over the winter, Son seems more stable during her spins.

Her signature move is the fouette pivot, during which Son spins while standing on one foot as the other is extended out to force the spinning momentum. Up until last year, Son would have the working leg’s knee bent, but she improved her choreography by extending the working leg out.

This has enabled Son to earn 0.2 points per spin instead of 0.1 per spin based on technical difficulty. She can earn as much as 2.0 points if she spins 10 times with a fouette pivot. Son included the move in all four categories.

In addition to her signature spin, Son’s strategy for this summer is to aggregate more points with facial expressions. Artistic flourishes through body movements and facial expressions are considered key components in rhythmic gymnastics.

Rizatdinova’s trademark is the penche pivot, in which the gymnast spins with one leg as the axis and the other lifted in the air. Most gymnasts have their heel on the floor when doing their penche rotation. But Rizatdinova stands on her toe during the spin, increasing the technical difficulty of her move to receive 0.5 points per spin. She earned 1.5 to 2.0 points in each category with her penche pivot.

“Everything will come down to who does not wobble while doing their spin,” said Lee Kyung-hwa, a commentator for JTBC3 FOX Sports and former rhythmic gymnast. “Rizatdinova is often worn out by the third or fourth event, which are clubs and ribbon. In comparison, Son has trained hard to increase her stamina, and she looks steady even toward the end of the choreography.”