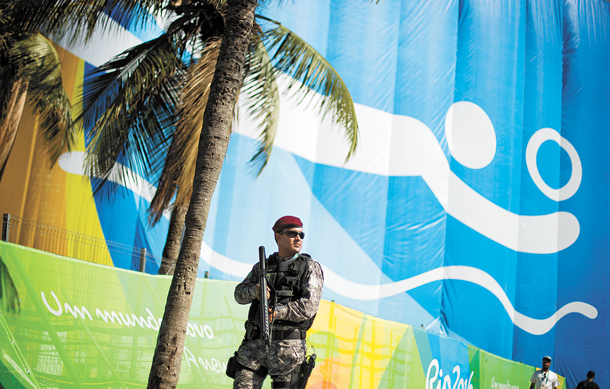 Ready or not, the 2016 Summer Olympics will kick off this week with its grand opening ceremony on Friday in Rio de Janeiro, Brazil. But many issues are putting a damper on the excitement for the first Summer Games to take place in Latin America in nearly half a century, and questions remain regarding the security of thousands who will make their way to Brazil.

Eight days before, Brazil authorities rounded up 10 people who were allegedly plotting a terrorist attack for the Olympics.

With the recent terrorist attack in Nice, France, in mid-July, as well as many other places around the world, news of a possible terror threat at the Rio Games is being taken very seriously.

The bureau of consular affairs of the U.S. State Department warns the U.S. citizens on its official website that “the city [Rio de Janeiro] continues to experience high incidences of crime, including armed robberies … crime can happen at any place or time … while crime occurs throughout the year, it is more frequent during Carnival and the weeks prior.” It further adds that it is not uncommon to receive reports of thieves and rapists slipping drugs into drinks at bars, hotel rooms and street parties.

A JoongAng Ilbo correspondent in Rio can attest to the concern. The correspondent reported last week that upon his arrival in Rio de Janeiro, the first thing that came to his attention as he stepped outside the airport was a sign that said, “Welcome to Hell.”

He further added he could not help but notice the heavily armed military personnel throughout the arrival hall and nearby areas in the airport. According to a citizen he met at the airport, although Rio is generally safe, it would be difficult to guarantee one’s safety without a weapon [such as a gun].

The Ministry of Foreign Affairs of Korea (MOFA) recommends travellers to take precautions when travelling to Rio. According to the safety guideline issued by MOFA, Korean citizens should keep out of favelas, Brazilian ‘shantytowns’ or slums that are located on the outskirts of large cities such as Rio.

“We advise Korean citizens who are visiting Brazil to refrain from going outside alone or late at night,” said Park Kyong-sig, director at the overseas Korean nationals protection and crisis management division of MOFA. “They also have to be cautious about armed robbers. Since owning a gun is illegal in Korea, thieves armed with guns are rarely found in Korea and I think this makes Koreans less perceptive of the danger. We recommend that when faced with an armed robber, Koreans should not fight back but just follow whatever they say.”

Park added, “Koreans also must be cautious of taking cellphones outside and make sure they are hidden inside one’s pocket and not shown. Koreans are always with cellphones and they are a desirable target since it is easy to trade cellphones for cash.”

Park also emphasized the importance of Koreans staying away from favelas, saying some local media reported that it seems safe in these slums but the accuracy of these reports are questionable.

To ensure that Korean citizens stay safe in Rio, MOFA will also run the temporary consular office in Rio starting today and running until August 22.

“The office will assist Koreans whenever they encounter crimes or accidents,” said Park. “It will report incidents to local police and help Koreans get services from local hospitals. We will also hand out leaflets with basic safety guidelines.”