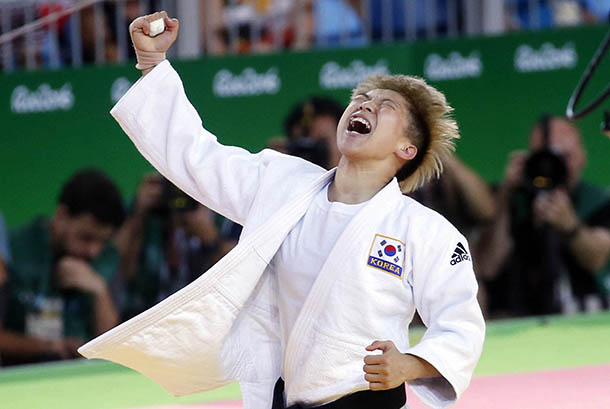 Jeong, who competed in the women’s -48-kilogram category, took on Paula Pareto of Argentina and challenged the Argentinian from early in the match with a semi page, or a shoulder throw. Jeong lost the lead with two minutes remaining in the match with a waza-ari, a half a point, and was unable to overcome the deficit.
Although Pereto, who won a bronze during the 2008 Beijing Olympics, received a penalty for passivity, the Argentinian veteran led the match to pocket the gold.

Pareto and Jeong met at the 2015 World Judo Championships in Astana, Kazakhstan, where Pareto defeated Jeong in the semi-finals. Pareto claimed gold from the tournament while Jeong took home a bronze after defeating Ami Kondo of Japan in the bronze medal contest.

This is the first Olympics medal for Jeong, who made her way to the finals by taking down world No.1 Urantsetseg Munkhbat of Mongolia in the quarters.

“I wanted gold so much,” said Jeong. “I wanted to start the medal run for Korea with gold and I feel I have let others down.

“But I think people didn’t expect something like this,” she added. “Everyone was paying attention to the men’s judoka team so I pushed myself during training thinking that the camera will be on me once the match is over.”