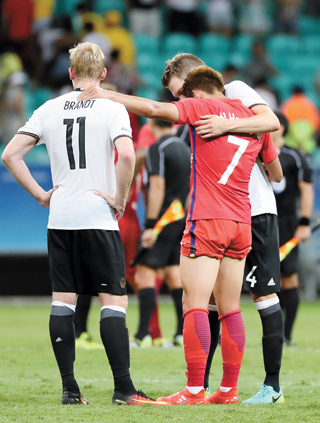 Son Heung-min of Korea, center, greets his old teammates from Bundesliga, including Julian Brandt of Bayer Leverkusen, left, after the preliminary match on Sunday against Germany. [JOINT PRESS CORPS]

Shin Tae-yong, the skipper of the Olympics football team, had a scenario in mind before Sunday; after crushing Fiji 8-0, he would continue the momentum against Germany and defeat the European football power in the next preliminary match to secure a spot in the quarterfinals before any other team.

It was a great plan, but one that was too good to be true, as Shin and the squad will now have to see the outcome of their match against Mexico to determine where they will be during the knockout stage after tying with German squad 3-3 on Sunday in Salvador, Brazil.

As an Olympic event should be, the football match between Korea and Germany on Sunday in Salvador was filled with dramatic twists and turns.

Coming out of an 8-0 win over Fiji, Korea looked confident heading into the match against Germany.

Their confidence delivered, too, as Korea initially led the match when Hwang Hee-chan, a forward, scored the opener in the 25th minute during the corner kick set-play by taking the ball near the end line and netting it past the German defenders.

But if Shin thought Germany would let Korea get away with an easy win, he could not have been more mistaken. Only eight minutes after the opening goal, Germany’s Serge Gnabry matched the score with an equalizer before the end of the first half. Then, when the second half started, the Germans came out strong and took the lead for the first time in the game, with Davie Selke driving a shot past Kim Dong-jun, the Korean goalie.

Now behind the Germans 2-1 with 35 minutes to go, someone from the Korean squad had to bring the momentum back, and Shin and the rest of the squad knew who to count on - Son Heung-min, a wild card and the only Premier Leaguer of the Korean team.

Two minutes after Selke’s goal, Son took possession of the ball near the penalty box on the German side of the pitch. He was surrounded by three to four German defenders who looked physically domineering, but Son knew how to bypass them, shaking them off with solid footwork and finally drilling home a shot with his left foot to even up the score.

But Son wasn’t the only wild card that found the back of the net that day. Substituted in at the 74-minute mark to replace Moon Chang-jin, Suk Hyun-jun, a striker from FC Porto, netted Korea’s third and final goal in the 86th minute with a shot off his right foot.

The victory seemed imminent and the scenario Shin had initially imagined looked within reach. But no one, not even Shin, thought the Germans would match the score once more after the regulations. With three minutes given as the added time, Korea’s defense struggled as Germany’s offense bombarded the Korean-side with a full-out attack. Korean defenders cut Germany’s attack with a minute remaining by delivering a foul, giving the European team a free kick near the penalty box. Now with one minute to go in extra time, Germany equalized the match off the free kick, crushing Korea’s hopes to secure an early spot in the quarterfinals.

“The players fought well,” said Shin. “Both our team and Germany’s - we all played our best. We fell within a span of a minute but the players showed their passion despite the hot weather.”

“Offensively, I was very satisfied but I found some things to work on defensively,” Shin added. “The German team was also very offense-oriented so it must have been a fun game to watch for everyone. Of course, on the bench, we were anxious the entire match.”

“It was an honor to be able to play in the Olympics against Germany,” said Son, who used to play in the Bundesliga and was spotted after the match talking with German players. “It would have been better if we won but both of our teams showed a good performance out there.”

The squad also promised that they will not settle for a draw against Mexico, going into the next match on Wednesday in Brasilia to grab a quarterfinals berth.